‘Mortal Engines’ is this generation’s ‘Star Wars,’ based on YA adaptation standards

After this many young adult novel adaptations, or YA films to all the cool kids, set in desolate futures (“The Hunger Games,” “Divergent,” “The Maze Runner,” “The 5th Wave”), we might need a special barometer for determining their quality. Here goes: 1) unique commentary on society; 2) young, attractive, mostly white protagonists with acting skills a step above cop drama guest star; 3) a creative take on the future; and 4) a story that does at least one thing differently. 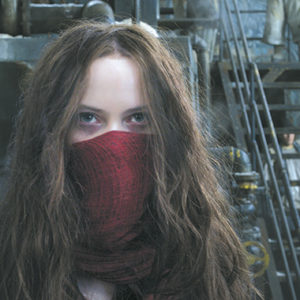 By those standards, “Mortal Engines” is this generation’s “Star Wars.” It drips with originality. When’s the last time you’ve seen London on wheels driving around a barren land consuming other cities on wheels? And a few familiar faces even provide this one with a level of cultural capital.

Alas, if the year’s most outlandish YA film is “Star Wars,” it has more in common with the prequels and their affinity for absurd visuals and bland performances. In reality, it’s “Lord of the Rings” for the monster truck crowd, this generation’s “Waterworld.”

How’d the future go this bad? The 60-Minute War, as it’s called. I assume this is an attack on the CBS News show. Of course, this “Municipal Darwinism,” the guiding principle for consuming other cities comes with its flaws, namely the dark past of beloved leader Thaddeus Valentine (Hugo Weaving).

His secrets are almost revealed by Hester Shaw (Hera Hilmar), scarred from her last encounter with the former Agent Smith. And even though Tom (Robert Sheehan), a historian who collects “old-tech,” intervenes to save Thad, he sees too much and pushes off London (remember, it’s on wheels).

Before we continue, we need to discuss one of futuristic sci-fi’s most obnoxious tropes: modern cultural artifacts as ancient gems. It was annoying in “I, Robot” when Will Smith dons some classic Chuck Taylors, and “Mortal Engines” cranks it into overdrive. An iPhone here. A toaster there. Consuming the “indestructible food of the ancients.” A Twinkie. They eat a thousand-year-old Twinkie. 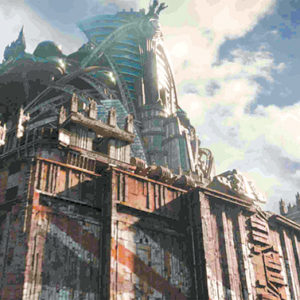 London is on wheels in “Mortal Engines,” a film set in a dystopian future. (photo courtesy of Universal Pictures)

And of course, a quick life lesson about contemporary hubris. Let’s just call it the obligatory reminder that the Combover Who Must Not Be Named is entirely OK with damaging the planet and aiding a spiral into a dystopian wasteland.

The world eventually expands beyond the Hot Wheel cities to reveal what China’s been up to. First, we hang out in Airhaven. Guess where it resides. Then we learn the Great Wall got bigger and better. Turns out this is really a story about Western colonialism versus a pluralistic utopia. Regardless, most of the actors of color don’t make it to the end. Sorry for the spoiler, but there’s no way this one gets a sequel.

Frankly, “Mortal Engines” could be loads of fun as a clever piece of animation. As a live-action film, hoping for the sweet, sweet box office earnings only a PG-13 adultish film can earn. But the wigs, gaudy costumes and accidentally cartoonish CGI create a superficial experience: steampunk-lite sequences desperately parading as meaningful.

For all its grandiose effects, sets and setting, the human drama is too familiar. Vengeance, corruption, a naive protagonist seeing the light, Weaving as the villain once more. We know this story too well.

Newbie director Christian Rivers, following a couple decades of visual effects credits, does what he can, but the writing is just so bad. This one’s on the team that wrote “The Lord of the Rings” trilogy Fran Walsh, Philippa Boyens and Peter Jackson, who also produced. Great minds apparently think alike when they develop wretched dialogue and a few of the best pictures of all time.

Of all the young adult novel adaptations, this one’s the most audacious. But that’s not always a good thing. As far as Peter Jackson productions go, “District 9” is the only barometer for quality. This feels like far too many wasted attempts at genre poaching, the result of a promising concept on page without any soul on screen.

On the bright side, it’s one of the best films with “mortal” in the title. Feel free to look up those train wrecks on your own.