Metro and ARTT to consider aerial gondola to Dodger Stadium

The Los Angeles County Metropolitan Transportation Authority announced last Thursday that it has signed a letter of intent with Aerial Rapid Transit Technologies to begin the negotiations for a privately funded aerial gondola to Dodgers Stadium. 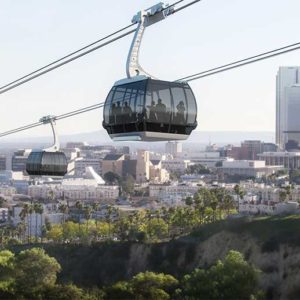 “This is a critical milestone in developing an innovative and exciting way for Dodgers fans to get to the game while reducing traffic,” Metro CEO Phillip A. Washington said. “For the sixth year in a row, the Dodgers have led Major League Baseball in attendance and we want to keep that streak going by finding ways to make it more convenient to reach the stadium.”

The letter of intent signals Metro’s interest in implementing the project and moves it from the unsolicited proposals evaluation stage to project development. Metro and ARTT will now negotiate to reach agreements on roles and responsibilities for planning and constructing the gondola.

“The Dodgers are excited that Metro is moving forward with new, innovative ways for people to get to and from Dodger Stadium,” said Tucker Kain, chief financial officer of the Dodgers. “We will continue to work with local agencies and community groups on ways to improve the stadium experience for Dodger fans, stadium visitors, employees and local residents.”

“The signing of a letter of intent with Metro is a critical step in building the gondola between Union Station and Dodger Stadium,” said ARTT Project Manager Martha Welborne. “This privately funded, zero-emission transit line will have the capacity to move thousands of people every hour while reducing traffic and directly linking Dodger Stadium with the region’s public transit system. We look forward to working with Metro staff to get the aerial off the ground and fans flying to the stadium in 2022.”

Metro has run the popular Dodger Stadium Express free bus service from Union Station since 2010. A second route between Harbor Gateway Transit Center in the South Bay and the ballpark was added in 2015.

A gondola and other options for improving access to Dodger Stadium were part of an informational study in 1990 by the Los Angeles County Transportation Commission, which later merged with the RTD to form Metro. The idea was never pursued until earlier this year when ARTT revived the concept and submitted an unsolicited proposal to Metro’s Office of Extraordinary Innovation.

Metro created its unsolicited proposals program in 2016 to encourage innovation through partnerships with the private sector that would not have occurred through the agency’s normal procurement process.

“This proposal is precisely the kind of out-of-the-box thinking we envisioned when we set up our Unsolicited Proposals process,” Metro Chief Innovation Officer Joshua Schank said. “By allowing potential partners to come to us with ideas and solutions, Metro has positioned itself to tap into the creativeness and ingenuity of private sector innovation.”