‘Love Actually Live’ warms hearts for the holidays at The Wallis

In today’s never-ending news cycle of ups and downs, there’s nothing like a holiday film to melt away the worries and only focus on love.  The opening scene of “Love Acutally Live” does just that and reminds us why we still actually love the 2003 movie. 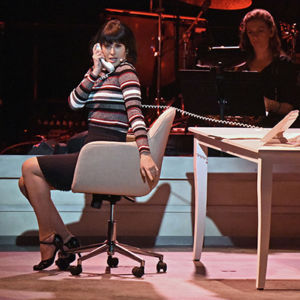 There’s still time to catch “Love Actually Live” at the Wallis Annenberg Center for the Performing Arts. The multimedia-concert celebration of the holiday movie soundtrack runs through Monday, Dec. 31.

Co-produced by The Wallis, Shane Scheel and Siobhan O’Neill, and inspired by the Universal Pictures/Working Title motion picture written by Richard Curtis, this world-premiere production transforms The Wallis’ Bram Goldsmith Theater into an immersive cinema. The production, performed live by an all-star cast and 15-piece orchestra, includes the songs “Christmas Is All Around,” “The Trouble with Love Is” and “Both Sides Now.”

“Love Actually Live” actors andscenery intertwine with video projections of the beloved holiday film as they bring scenes to life. Snipets of the movie remind the audience of particularly heart warming – and wrenching – scenes while live singers and musicians perform, creating a cinematic spectacle. Willis shines as the part of the sexy secretary and the character Julia (Keira Knightley in  the movie).

Tomasina Abate, portraying the Emma Thompson role Karen, captures her mannerisms and personality, right down to her dowdy shoes. I especially appreciated her rendition of  “Both Sides Now” by the character’s favorite artist, Joni Mitchell.