Police are asking for the public’s help in finding a driver who struck and severely injured a 34-year-old man on Nov. 8 on Vine Street. A $25,000 reward is available for anyone who provides information that leads to an arrest and conviction of the driver. 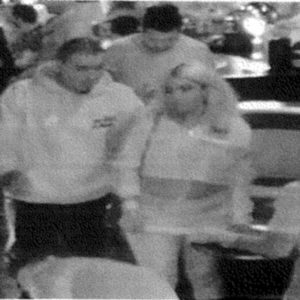 Police are searching for the man shown at left in this security camera photo. He is wanted in connection with a hit-and-run that occurred in Hollywood. (photo courtesy of the LAPD)

The victim, Corentin Villemeur, had photographed a performance by YouTube star Lele Pons at The Avalon and later was struck while crossing Vine Street at approximately 11:25 p.m., said Det. Connie White, with the Los Angeles Police Department’s West Traffic Division. Villemeur, who is from France, remains in a hospital intensive care unit with multiple injuries.

The victim was walking in a marked crosswalk in the 1700 block of Vine Street, mid-block between Hollywood Boulevard and Yucca Street. White said investigators interviewed witnesses and checked security cameras and determined an Acura sedan was driving south on Vine Street when it went through the crosswalk and hit Villemeur. Police obtained the license plate number, but the car has been sold multiple times since September and the new owners never re-registered it with the California Department of Motor Vehicles, White said. Detectives interviewed the last person to whom the vehicle was registered, but have been unable to follow the trail of new owners to find the car or the driver who struck Villemeur.

“We are 100 percent sure about the vehicle,” White said. “There were hundreds of people at the venue for a concert. We are hoping someone will call with new information.”

The vehicle is a 2002 silver, four-door Acura with the California license plate number 5TBA759. The driver was a Hispanic man approximately 30 years old. He has a heavy build, short hair and goatee, and was wearing a red hooded sweatshirt with a white “A” on the front and back.

The detective said Villemeur had been hired by Pons to photograph the concert. White did not know how long the victim had been in Los Angeles. Family members including his mother have been traveling back and forth from France keeping vigil at the hospital.

“It’s really sad,” White said. “We are looking for any type of leads.”

During weekends and off-hours, call the West Traffic Division watch commander at (213)472-0562.

Most of Cherokee Avenue trees spared the ax