Eighty years after the Kindertransport evacuated nearly 10,000 Jewish children to Britain to escape the brutal Nazi regime, the German government will pay recompense to the program’s survivors. 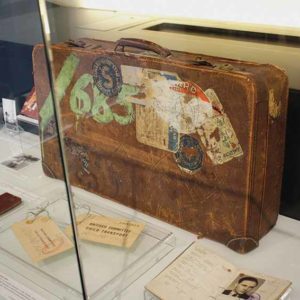 Between 1938 and 1939, nearly 10,000 Jewish children in Germany and Nazi-controlled areas escaped to Britain through the Kindertransport. (photo courtesy of the Los Angeles Museum of the Holocaust)

Germany will offer €2,500, or approximately $2,800, for each living survivor of the Kindertransport beginning Jan. 1. The Conference on Jewish Material Claims Against Germany, the organization that negotiated the payments with the German government, estimates that there approximately 1,000 Kindertransport survivors alive today. Beverly Hills resident Ruth Moll is one of those remaining survivors.

Originally from Stuttgart, Germany, Moll was 10 years old when her parents placed her and her two sisters on a train to Britain in 1939. While her father had been imprisoned, Moll’s family had largely hid the horrors of the Nazi regime from the children. Moll said she had no idea what was happening when she boarded the train.

“It was all very quick,” she said. “It was a very traumatic time.”

British authorities organized the Kindertransport rescue operation following the violence of Kristallnacht in 1938, when German forces and civilians vandalized Jewish synagogues, homes, businesses and schools, killed close to 100 Jews, and incarcerated 30,000 people in concentration camps in one night. Children under the age of 17, as a result, were allowed to enter Britain en masse from Germany and Nazi-occupied territories between 1938 and 1939.

Adult family members could not come though, and many of the Kindertransport children were the only members of their families who survived the Holocaust.

Ambassador Stuart Eizenstat, a negotiator for the Conference on Jewish Material Claims Against Germany, called the country’s compensation payments “a small measure of justice” for the survivors who had “to endure a life forever severed from their parents and families.

“There is the moral imperative of accepting responsibility. This is the real importance of such an action by the German government, and by inference, the German people,” said Paul S. Nussbaum, president of the Los Angeles Museum of the Holocaust. “These kinder lost their families, their world and everything they held sacred. This acknowledgment is long in coming, but is to be saluted.”

After escaping the Nazi regime and leaving their families and communities, Kindertransport survivors faced additional hardships. Once Moll and her sisters arrived in Britain, they remained together under the watch of their mother’s cousin and attended a boarding school outside of London. However, none of the three sisters spoke English, and they were the only Jewish students at the school.

Eighteen months later, Moll’s parents found a way to join the three girls in Britain. Other Kindertransport survivors weren’t so lucky. Moll’s late husband, Rudy Moll, who she later met in Los Angeles, also fled Germany via the operation, but after he boarded the train, he never saw his family again.

“My husband was alone in this world at 11 years old,” Moll said. “He didn’t finish school or anything.”

Upon learning of the compensation payment, Moll, who is now 90 years old, expressed ambivalence, but had plans to look into it. She said past compensation programs for Holocaust survivors required a significant amount of paperwork, which she saw as a deterrent.

“It’s very interesting that after 80 years, [Germany is] doing this. They must have a bad conscience,” Moll added. “In today’s world, that [compensation] amount doesn’t go that far unfortunately, but I see it as better than nothing.”

“This is truly a tremendous opportunity to learn from the past,” said Jordanna Gessler, the museum’s director of education and exhibit curator, in a statement.

For Moll, exhibits such as “Childhood Left at the Station” and the Los Angeles Museum of the Holocaust are what she sees as the most critical way of honoring and redressing survivors.

“The world is not any good right now. It’s not a happy world,” Moll said. “My concern is how much is this [information about the Holocaust] hitting the public? We don’t want this to happen again.”

What’s next for climate change in California?