Japan House Los Angeles has announced that the exhibit “Sou Fujimoto: Futures Of The Future” has been extended through Jan. 6. 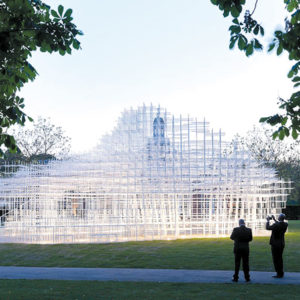 Sou Fujimoto’s “Serpentine Gallery” is a signature piece featured in the exhibit of the architect’s works at Japan House Los Angeles. (photo by Iwan Baan)

The exhibition features more than 100 architectural models and large-scale photographs of international projects by the acclaimed Japanese architect Fujimoto. It includes works from Fujimoto’s “Architecture is Everywhere,” a unique exploration of his past and current projects. The displays range from complex models to the whimsical reimagining of the future with small-scale human figures placed next to everyday objects such as potato chips.

Named the Wall Street Journal’s 2014 Architecture Innovator of the Year, Fujimoto has designed buildings around the world since 2000. A reoccurring theme in Fujimoto’s work is the primitive future. This apparent contradiction refers to the primordial, intuitive moments that reconnect people with their own humanity and new possibilities.

“Futures Of The Future” invites viewers to participate in Fujimoto’s thought experiment surrounding the possibilities of architecture, and to be inspired to reimagine the future. Fujimoto addresses many opposite concepts in addition to the “primitive future.” His designs often feature juxtapositions of outside and inside elements, nature and the urban environment, objects, and spaces. In Fujimoto’s breakout piece “Serpentine Pavilion,” hard-edged white poles descend onto a London park in a pattern that is simultaneously natural and mechanical. The result is a piece that is part landscape and part functional furniture and enclosed building.