The United States Holocaust Memorial Museum presented to more than 250 guests the panel “What Were We Watching? Americans’ Responses to Nazism Through Cinema, Radio and Media” at the Writers Guild Theater in Beverly Hills on Nov. 15. 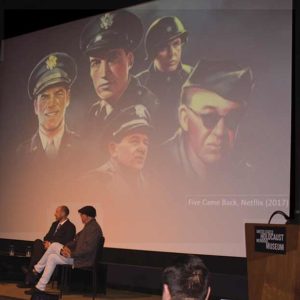 Panelists, who discussed how Hollywood and leaders in entertainment and government battled for the hearts and minds of Americans, included moderator Patt Morrison (left), author, radio-television host and Los Angeles Times journalist; Daniel Greene (center), curator of USHMM’s “Americans and the Holocaust” exhibition; and Laurent Bouzereau (right), director and producer of the Netflix series “Five Came Back.”

Stories about World War II and the persecution of Europe’s Jews were a constant presence in American movie theaters and living rooms throughout the 1930-40s. Award-winning films such as “Mrs. Miniver,” “The Great Dictator” and “Casablanca” shaped Americans’ understanding of the Nazi threat, while newsreels and radio programs offered a brief glimpse into world events and the range of opinions on the war effort.

Talk with ‘Fresh Off the Boat’ cast at Paley Center