At 4:20 sharp on Tuesday afternoon, the city of West Hollywood announced the businesses that have been selected for a chance to receive 36 new cannabis business licenses that will be issued for recreational and medical sales, two types of cannabis lounges and cannabis delivery. 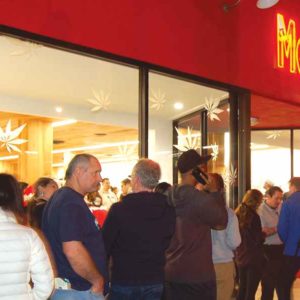 MedMen began selling recreational cannabis shortly after New Year’s Day in 2018, but the dispensary was not selected to receive one of the eight permanent licenses for recreational sales the city will issue. (photo by Edwin Folven)

Following a monthslong evaluation process by a five-member committee, which graded more than 300 applications based on criteria established by the City Council, eight licenses will be issued in each of the five license categories, including four medical licenses that the city’s four existing medical dispensaries will be able to keep.

But none of those four existing medical dispensaries was selected to receive any of the eight new adult-use retail licenses. If they can’t continue selling recreational cannabis, they don’t know if they will be able to survive the influx of new businesses, and their exclusion could create a window next year where West Hollywood has no recreational cannabis for sale, despite the city’s goal of pioneering the new industry. The City Council rejected a proposed solution that would have allowed two of its medical dispensaries to receive adult-use retail licenses, but city staff said it will still try to avoid any gap in recreational sales. All four will be able to keep their medical dispensary licenses.

Jason Beck, owner of Alternative Herbal Health Services on Santa Monica Boulevard, told council members they “will literally be signing our death certificate” by preventing the dispensary from obtaining an adult-use retail license. Beck said the dispensary, which opened in 2004, has a long history of navigating the safety, security and legal concerns the city tried to take into account with its screening process.

“We are the proven entity,” he said. “We have gone through the gauntlet and come out the other side.”

With temporary permits issued by the city, West Hollywood’s medical dispensaries were among the first in the county to sell recreational cannabis when it became legal at the beginning of this year. But, due to state law, those temporary permits can only be renewed through the end of March. It could take six to 12 months for the new licensees to have their businesses up and running, creating the possibility that there won’t be any recreational cannabis sales in West Hollywood for at least a month or two.

“That seems strange given how the city has seemed to be a leader here and has embraced this issue,” Councilman John Heilman said.

“It’s not a fair process if you change the rules just because you don’t like the outcome,” Councilwoman Lauren Meister said.

Before the vote to keep the eight-license limit on adult-use retail, Mayor Pro Tempore John D’Amico suggested that the council postpone the discussion. More information from the state, which might allow medical dispensaries to sell recreational cannabis anyway, he said, and more information from the applicants that were selected by the city about how soon they could be open for business would better inform the discussion.

“We’re having a discussion without any of the actual information that we need, except that four really great businesses in our community potentially will be asked to stop serving their customers if they don’t get some way to continue to provide service,” D’Amico said.

Potential licensees range from the Artist Tree, which was the only applicant to score in the top eight in each of the five categories, to ASHE Society, Door Number 6 and Muthatree, which each have a chance to receive one license for an edibles-only consumption lounge. The applicants who made the cut will next go before the city’s Business License Commission to start the process of securing their licenses.