Repairs have been completed on a leaking pipeline that supplies water to Beverly Hills, the city and Metropolitan Water District announced on Dec. 22. 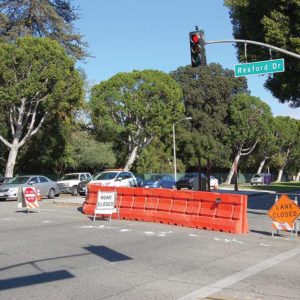 Final repairs to the roadway will be made in 2019 after crews finished repairing the pipeline on Dec. 22. (photo by Edwin Folven)

The leak was discovered on the weekend of Dec. 14-15 near Sunset Boulevard and Alpine Drive. The intersection reopened on Dec. 23, and final repairs to the roadway will be completed next month, according to the news release.

“We are thankful for the community’s cooperation and the diligence of all who worked to resolve this leak as quickly as possible,” Beverly Hills Mayor Julian Gold said in a statement.

Beverly Hills officials were urging all residents, businesses and visitors to conserve water as crews worked around the clock making emergency repairs. The pipeline, known as the Santa Monica feeder, is nearly 80 years old and stretches 24 miles, from Eagle Rock to Santa Monica. It serves Glendale, Burbank, Los Angeles, Beverly Hills and Santa Monica. The portion of the pipe repaired is 32 inches in diameter and made of cast iron, which was commonly used in the 20th century to transport water. Around the country, new pipes and replacement pipes for water transportation are now typically made of ductile iron.

The city of Beverly Hills and Metropolitan Water District initially said repairs could be completed as early as Dec. 24. Crews began repairs on Dec. 19 after pinpointing the leak, and the pipeline will be inspected and disinfected before it’s put back into service, according to a Dec. 20 update. The cause of the leak has not yet been determined, but a Metropolitan Water District spokeswoman said it may have been due to the pipe’s age.

“Thanks to the patience and cooperation of the residents, visitors and businesses in Beverly Hills, we’ve been able to make these emergency repairs and ensure the city has a reliable water supply, said Jim Green, Metropolitan Water District’s water system operations manager.

2018 in review: Parades, Protests and Politics