Representatives of the city of West Hollywood and its Public Safety Commission joined West Hollywood sheriff’s and fire department personnel on Dec. 12 to remind community members about not drinking and driving during the holidays. 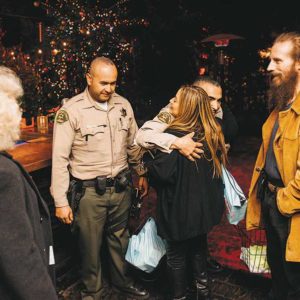 West Hollywood city officials and sheriff’s deputies distributed coasters with reminders about not driving impaired to restaurants and bars throughout the city. (photo by Jonathan Moore)

West Hollywood city officials and sheriff’s deputies visited restaurants and bars to distribute 100,000 drink coasters with printed messages reminding patrons not to drink and drive, and to instead choose a designated driver, ride-hailing service or taxi. The coasters are printed with telephone numbers for taxi companies and a link to information about West Hollywood’s free weekend trolley services including The PickUp, Sunset Trip and newly expanded Saturday service on the Cityline shuttle, which connects to the Metro Red Line subway station at Hollywood and Highland. For information, visit www.weho.org/transit.

The city of West Hollywood has also debuted a Grinch-themed “Don’t Drive Impaired” WeHoTV public service announcement to encourage holiday revelers to utilize alternative forms of transportation if they drink alcohol or use cannabis. For information, visit youtube.com/watch?v=ckGu9BTwG84 and weho.org.

‘Love Actually Live’ warms hearts for the holidays at The Wallis