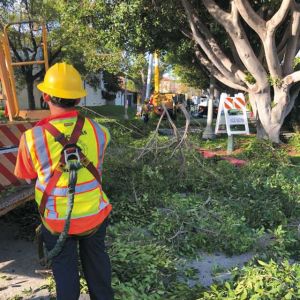 Crews started trimming trees in Hancock Park last week. The work is expected to get underway in earnest in the first part of the new year. (photo courtesy of the 4th District council office)

The tree trimming began near the corner of Fourth and Las Palmas, where Ryu and Bureau of Street Services Director Adel Hagekhalil posed for photographs with Hancock Park Homeowners Association President Cindy Chvatal and others involved in organizing the project. Chvatal said trees in Hancock Park have needed trimming for years but the project lacked funding. The project marks the fulfillment of a campaign promise Ryu made when he was first elected to office in 2015.

“We are thrilled to see this happen,” Chvatal said. “They are going to be trimming the trees and will be trying to save any that have problems. There’s a plan in place now. They are going to try to save our urban canopy.”

The trimming will occur throughout the neighborhood during the beginning of the year along all streets between Melrose Avenue and Beverly Boulevard, and east of Highland Avenue to the Wilshire Country Club. Additionally, tree trimming will occur on Hudson Avenue and Hudson Place between Beverly Boulevard and Third Street; June Street between Third Street and Wilshire Boulevard; McCadden Place between Third Street and Wilshire Boulevard; and Fourth Street between Las Palmas and Highland avenues.

“Hancock Park is one of the most beautiful neighborhoods in Los Angeles, in no small part because of the iconic trees that line its streets,” Ryu said. “I have been committed to tree trimming in Hancock Park that serves our protected trees and respects the historic character of the neighborhood since day one. I’m so thankful to the Bureau of Street Services and the Urban Forestry Division for working with my office and the community to get this done, and I look forward to more improvements for our trees, sidewalks and streets in Hancock Park in 2019.”

In addition to tree trimming, the Bureau of Street Services installed new ADA-compliant ramps and sidewalks near the corner of Fourth and June streets. The sidewalks wrap around tree roots near the corner, eliminating the necessity to remove nearby trees.

“At Fourth and June, we encouraged the city to do tree preservation when putting in ramps and sidewalks, and they created a meandering sidewalk that goes around some old elms,” Chvatal said. “Going forward, that’s what we want to do. On Rossmore, we already had some trees trimmed, so this is going to be the next pass. We expect the trimming will happen in the next four to six weeks. Hopefully it will be done in spring before it gets too hot.”

Counting down to a new year, new state laws