A group of 10 male suspects smashed the glass front doors of a store on Robertson Boulevard early Monday morning and stole luxury handbags, shoes and clothing valued at up to $100,000. 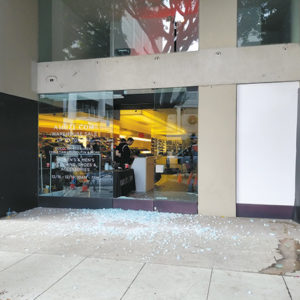 The Amuze pop-up shop on Robertson Boulevard was burglarized early Monday by a group of 10 suspects who smashed the glass front doors. The store reopened later the same morning. (photo courtesy of David Zokai)

The burglary occurred at approximately 3:10 a.m. on Dec. 17 at Amuze, a pop-up shop operating in the 100 block of Robertson Boulevard from Dec. 16-19. The temporary store, run by Amuze.com owner Jonathan Chesner, was inside a vacant storefront.

Hours after the burglary, Chesner had re-filled the store with merchandise and it reopened. He said the pop-up shop was his second temporary store, following the success of a similar venture in New York City. The bulk of his business is conducted online, but Chesner said pop-up shops where customers can see and buy merchandise onsite are gaining in popularity.

“Think of it as Marshalls for high-end and luxury designs,” Chesner said. “We find a location, set up shop and do a pop up.”

LAPD spokesman Drake Madison said the male suspects pulled up in front of the store in three vehicles. The suspects stole merchandise from manufacturers such as Gucci, Dolce & Gabbana and Christian Dior, among others. The burglary lasted only minutes, and the suspects got back into the vehicles and fled. People are present in the neighborhood at all time of the day and night, and witnesses called 911. The suspects were last seen heading south on Robertson Boulevard toward Third Street.

The perpetrators wore dark clothing and there was no further description. The vehicles were described as a black Dodge Charger, black Volkswagen and a Honda Civic. Police are reviewing security camera footage and hope someone will provide a tip leading to the suspects.

Chesner said he awoke to find numerous text messages from people he knows who saw reports about the burglary on the morning news. He quickly headed to the store and met with David Zokai, of Unique Modern Sign, who had helped him open the pop-up shop over the previous days. Zokai coordinated with police and helped get the store open again. He surmised the suspects had visited the store the previous day but declined to elaborate further because of the investigation. Security was hired to be in the store during business hours, but guards were not present overnight.

“I was shocked,” Zokai said. “We had cameras up in case something like this happened.”

Chesner estimated the value of the merchandise at up to $100,000 and said it was insured. He remained undaunted by the burglary and plans to open other pop-up shops in the near future.

“God willing, it won’t be a financial setback,” Chesner said. “They did steal a lot of product. All of the shelves were completely filled with merchandise and they cleared a lot of them. Some of these handbags are $500 to $600, and we had 40 of them.”

Anyone with information is urged to call Wilshire Division burglary detectives at (213)922-8273. During weekends and off-hours, call the LAPD’s 24-hour hotline at (877)LAPD247.