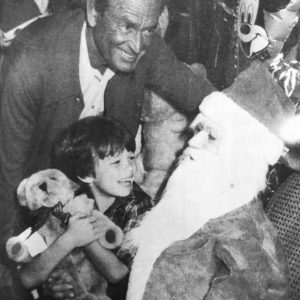 Former “The Price Is Right” host Bob Barker, who turned 95 on Dec. 12, dropped by the Original Farmers Market to spread holiday cheer in this photograph from the Dec. 6, 1984, issue of the Park Labrea News. From 1972 to 2007, Barker hosted the long-running game show, which is still produced next door to the Farmers Market at CBS Television City. Earlier this week, plans were announced that CBS Television City has been sold to a property development company. “The Price Is Right” and many other shows will continue to be produced there for at least the next five years.

BOB BARKER CONGRATS! from NORKY THE PENEAGLE the “OFFICIAL MAILBIRD” of the NORTH POLE. http://www.Norky.com Enjoying the photo of you & NORKY at the HOLLYWOOD SANTA PARADE in 2007 announcing you as the Grand Marshall and on the Front Cover of the Park Labrea News.