The six month ban on shared mobility devices in Beverly Hills, mainly aimed at Bird and Lime saturating local streets with scooters, expired this month without a new ordinance council members were hoping for to regulate the devices. 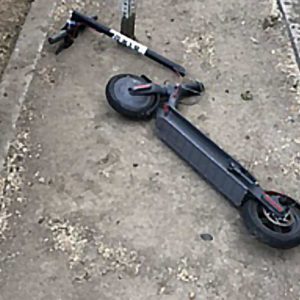 Riders zipping past pedestrians on sidewalks at speeds up to 15 mph and scooters left in public rights of way contributed to the Beverly Hills City Council’s decision to ban the devices, unless the city and the shared mobility companies can agree on a regulatory framework. (photo by Luke Harold)

Citing a lack of cooperation from the scooter companies over the past six months, the City Council approved a one-year extension to its shared mobility device ban at its Dec. 11 meeting. The ban could be shortened if council members establish a pilot program.

The scooters, which started appearing on city streets about a year ago and are accessible through smartphone apps, have been popular with tourists who use them to explore the local area, and residents who use them to avoid their cars for short trips. But city councils, police departments and local residents have been concerned about riders zipping down public rights of way at up to 15 mph without helmets, and then leaving the devices in the middle of sidewalks. Bird and Lime advise riders to stay off sidewalks unless local law allows them to, but riders have commonly used sidewalks.

A representative from electric scooter company Spin said the company would be willing to work with the city on a regulatory framework. Councilwoman Lili Bosse said the city hoped to collaborate with Lime and Bird on a set of regulations over the last six months. Only Bird showed a willingness to work with the city, but not until the six-month ban was coming to an end, council members said.

“It’s a little disappointing the other vendors have not approached us, the two largest ones, during this entire time,” Councilman Robert Wunderlich said.

Councilman John Mirisch was the only vote against the 12-month ban. He said a ban wouldn’t solve anything, but Bird and Lime’s business model of circumventing local government is “not the way things can or should work.” It’s important, he added, for the city to reach an agreement with the shared mobility companies that includes data sharing, revenue sharing and terms of liability.

“I understand why and I completely condemn what some of these companies are doing,” Mirisch said. “In addition to being illegal, it’s obnoxious.”

Bird filed a lawsuit to challenge the city’s ban that results in fines issued to the companies for leaving the scooters out in public, and also allows Beverly Hills police to issue citations to riders. As of the end of November, Beverly Hills police have impounded 1,864 scooters, according to Lt. Elisabeth Albanese, department spokeswoman. No citations have been issued to riders.

The city of West Hollywood banned scooter companies from leaving scooters in public rights of way throughout the city. That ban has resulted in 16 citations issued to electric scooter companies, according to West Hollywood’s Code Compliance Division. Under the city’s enforcement policy, one citation can include multiple scooters. Pilot programs implemented in Los Angeles and Santa Monica include dockless bicycles and electric scooters.

Representatives from Bird and Lime did not respond to requests for comment before press time.