West Third Street, one of the most popular streets in Los Angeles with its many celebrated restaurants, has yet another star. Bacari West Third, of the Bacari Restaurant Group, is a Venetian-inspired eatery featuring a cicchetti-style menu with sharable pastas, pizza and salads, similar to those found in a traditional bàcari, or wine bar, in Venice. The restaurant only just opened in September, but it has since already become a popular brunch spot on weekends from 10:30 a.m. to 3 p.m., offering creative takes on classic items. 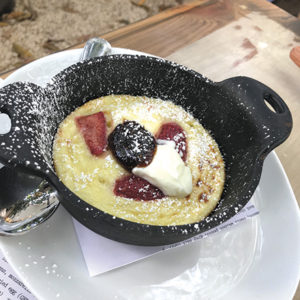 The delicious gluten-free Dutch baby pancake is topped with berries and a Mission fig and honey compote. (photo by Jill Weinlein)

As I entered Bacari, I immediately noticed its charming rustic décor and setting. Through the restaurant’s brick archway tunnel, there’s a beautifully distressed wooden gate with metal knockers. The garden patio features a massive bougainvillea dropping magenta-colored flowers onto tables. Most of the seating is out on this patio, but there is a low-ceiling interior dining space with exposed wood beams as well.

When we arrived during brunch time, at almost every table people were sipping refreshing bottomless mimosas, sangria, sparkling sangria or house prosecco, an option that comes in at $25 per person.

The menu includes Mediterranean dishes curated by Israeli-born executive chef Lior Hillel and executive sous chef Kevin Corona. We started with a pita stuffed with pickled red onions, capers, ribbons of thin smoked salmon and cucumber. It’s served with a pleasing dill and garlic crème fraîche, similar to a tzatziki sauce. This dipping sauce is so good, it’s hard to share – so be sure to order your own. 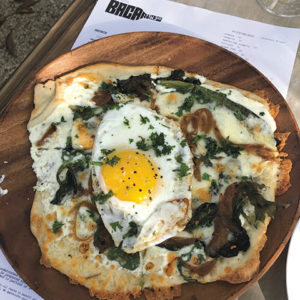 The avocado toast is beautifully presented with crisp pink and white watermelon radish triangles juxtaposed against the chunky avocado spread. The dense house-baked superfood bread, however, is what really sets this toast apart from other more basic variations. The texture of this gluten-free toast is spongy and nutty, perfect for holding the creamy green goodness of the avocado. A drizzle of Mediterranean olive oil and sprinkle of gray salt round out the buttery flavors.

I didn’t quite care for our next dish, a thin, panko-crust crab cake Benedict, but I did enjoy the hollandaise sauce, zested with grapefruit rind.

The free-range egg pizza, while different than expected, was delectable with its thin crust, creamy fromage blanc, caramelized onions and softly cooked egg. Other savory items on the menu include Bacari fries with a special sauce and fried egg, a croque madame and an open-face Bacari burger, which we all eyed as a couple next to us enjoyed them.

We finished our meal on a sweeter note with the gluten-free baby Dutch pancake, which arrived in a small black cast iron skillet. The bottom of the pancake was caramelized and slightly crunchy, while the top was warm and soft. Fresh red and purple berries and a lovely Mission fig and honey compote in the center added just a touch of sweet.