‘Aquaman’ is OK, the name is just bad

A reality show host sits in the Oval Office. Films featuring Batman and Superman now suck. And “Aquaman” turns out to be a good time at the movies. This is truly the darkest timeline. 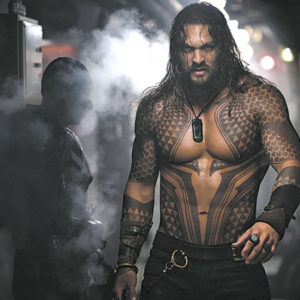 No film dubbed “Aquaman” should be this fun. It never even winks at this lunacy: straight-faced use of a superhero name that includes the word aqua, the cutesy synonym invoked by pee wee soccer players to polish back a few orange wedges after the big game. Even worse, the fan-favorite animated series “Young Justice” features Aqualad. And he’s one of the best characters on the show.

That point is, Aquaman and his mythos endure not because of that terrible name but despite it. So here we are, and “Aquaman” surpasses DC films’ recent bad luck. And it does so by going big. We’re talking octopus drummer and outlandish underwater battles big. It shouldn’t work, but it kinda does, with all the campy charm that should make it an instant dud.

“Aquaman” is the hero’s journey, a Homer story for the surfer generation. Similar to demigod Hercules, Arthur Curry (Jason Momoa, rocking long dark locks unlike DC Comics’ blond white iteration), the less awful name of the titular water boy, is half human, half Atlantean. More than that, his deceased mom, Atlanna (Nicole Kidman), was queen of the long-lost continent that now resides at the bottom of the ocean (don’t worry, the film packs in a lot of backstory). 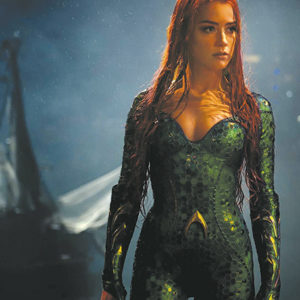 After a brief stint as a member of the Justice League, Arty is pretty content with surface dwellers, regardless of pleas by Princess Mera (Amber Heard, rocking an obvious red wig) to usurp the throne from half-brother King Orm (Patrick Wilson, his hair is OK) before he declares war on humans for their abuse of the seven seas.

If you hope “Aquaman” has a thoughtful message about pollution, look elsewhere; it merely assumes humanity sucks and must be either annihilated or educated. After all, those humans had the gall to name a character Aquaman. They truly deserve the wrath of the seven seas, led by Mera’s father King Nereus (Dolph Lundgren, going ginger).

Fearing millions will die on the surface and in the ocean, Art and Mera embark on a treasure hunt. The prize: an ancient trident donned by (fill in important expository information here). But hey, it’s guarded by a leviathan, so that’s kinda cool. Luckily, they have help from loyal Atlantean Vulko (Willem Dafoe, proving man buns belong in the ocean, not Silver Lake).

Along the way, Mr. Curry’s past comes back to haunt him with Black Manta (Yahya Abdul-Mateen II, preferring an enormous mask to flashy hair), Aquaman’s most interesting nemesis. He receives an origin within the first few minutes of the film – Arthur does something morally questionable – and returns for vengeance early on, but the two only encounter each once more for an extended action sequence with an abrupt conclusion. He’ll be back.

Momoa and Heard have the chemistry of an average first date on Match.com. On their journey across the world into realms unknown, Arthur is the meathead, a parody of masculinity, who does his best thinking when he’s not thinking, to paraphrase Mera, the brains of the bunch. She’s the real moral center and probably the right person to take the throne. But patriarchy.

Arthur is a better choice than the Ocean Master, as Orm prefers to call himself, but what does a man who goes by Aquaman know about class or helping Atlanteans settle coral reef disputes? Manifest destiny makes about as much sense underwater at it does on land.

Even though Arthur “Aquaman” Curry spends the entire film vying for the throne of underwater kingdom Atlantis, not a single joke is made about King Arthur. Everyone just lives their lives as if Camelot and Arthur’s quest for the Holy Grail doesn’t parallel Aqua Arthur’s search for an ancient weapon.

As outlandish as this film is – the finale battle features a whole lotta riding great whites into battle and something like a kraken released – it attempts to do what Marvel’s “Thor” films never dared: go fantasy-world big and let director James Wan (“The Conjuring,” “Furious Seven”) do his thing. Mythological stories are curse, rarely resulting in a winning concept. “Aquaman,” with its dumb name, actually outshines all those “Hercules” films, whatever you call “Percy Jackson” and most “Clash of the Titans” flicks. And this all goes down with that stupid name.