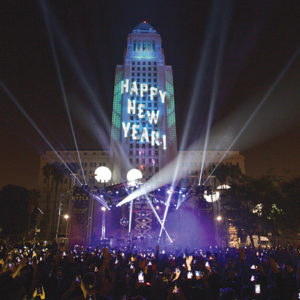 The alcohol-free, family-friendly event will cover 90 acres, from Grand Avenue to City Hall on Spring Street and from Temple Street to Second Street.

The free New Year’s Eve event features the theme “L.A. Dreams,” a celebration that imagines the future of Los Angeles County through the collective thoughtfulness and creativity of its children.

All patrons who attend will be subject to mandatory bag checks and metal detector wands. Guests are asked to plan ahead, arrive early to avoid lines that may be longer than usual, and allow extra time to enter the event.

Last chance to catch ‘The Color Purple’ at Greenway Theatre

The Restaurant at Montage Beverly Hills