Academy Museum ready for its close-up 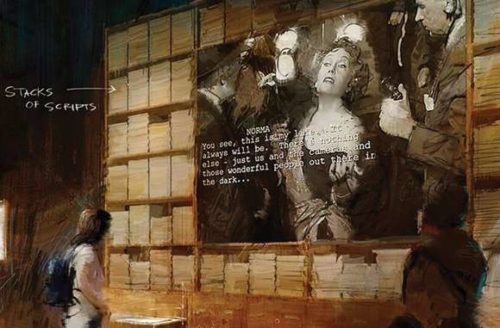 After years of seeing the Italian gold tiles, Texas limestone and spherical movie theater forming an imposing exterior at the corner of Wilshire Boulevard and Fairfax Avenue, executives of the Academy Museum of Motion Pictures finally gave a preview of what they have planned for the inside of the museum when it opens in about a year.

“This museum has exceeded all the hopes of our forefathers,” Dawn Hudson, CEO of the museum, told reporters during a news conference at the Petersen Automotive Museum on Dec. 4. “And foremothers; can’t forget about Mary Pickford.”

One of the highlights will be its opening temporary exhibition, the first U.S. retrospective of Japanese filmmaker Hayao Miyazaki, which will include a closer look at “My Neighbor Totoro” and “Spirited Away,” two films he directed, as well as more than 200 concept sketches, character designs, storyboards and immersive environments. One of the museum’s goals is to highlight the contributions international filmmakers have made to the medium.

“You all will be able to walk into that world with the anticipation you feel when you watch a movie,” Hudson said of what the museum hopes to achieve with all of its exhibits.

The Miyazaki retrospective will be followed by “Regeneration: Black Cinema 1900-1970” in fall 2020, which will delve into African American portrayals in film, from the medium’s emergence to shortly after the civil rights era.

Other exhibitions will include a “major work” by teamLab, an interdisciplinary art collective based in Tokyo, in the museum’s 34-foot-tall project space, and “Making of: The Wizard of Oz,” which will provide an in-depth look into the making of the classic film. The script, production design drawings and sketches, costumes and Dorothy’s ruby slippers will be on display.

“The Academy Museum is the realization of a long-held Academy dream to preserve movie history and to bring it into the lives of filmmakers, scholars, young people and the worldwide public,” said John Bailey, president of the Academy’s board of governors. “The great resources and dedicated work of the Margaret Herrick Library and the Academy Film Archive provide a foundation for the museum’s extraordinary installations and changing exhibitions.”

Kerry Brougher, the director of the museum, said film is “a complete amalgamation of almost all the other art forms put together,” and the museum wants to convey all those dimensions through its exhibitions.

“We want the Academy Museum to add to the public’s understanding of the evolution of the art and science of filmmaking around the world, to increase appreciation for this great art form and encourage people to examine the role of movies in society,” said Kerry Brougher, director of the museum. “At the same time, we want to bring to life the most important reason of all for caring about the movies: Because they’re magic.”