This New Year’s Eve, as crowds across the globe count down to 2019 with Champagne and other festivities, West Hollywood will host an alcohol- and drug-free alternative, its sixth annual #BOOM! Event at the West Hollywood Park Auditorium. 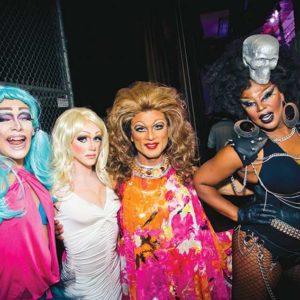 “West Hollywood is known worldwide for its nightlife and entertainment districts on the Sunset Strip and the historic Boystown District,” said West Hollywood Mayor John Duran, who has been sober for 22 years. “But we also have a significant segment of the community in recovery who want a sober New Year’s Eve. The event is open to anyone who wants to ring in 2019 in an alcohol- and drug-free zone.”

The celebration, from 8 p.m. on Dec. 31 to 1 a.m. on Jan. 1, will include free musical entertainment by DJ Eddie X, dancing, a photo booth, face and body painting, and a midnight toast.

The evening will also feature a costume contest, themed “House of #BOOM!” Attendees can choose from different themes for dressing inspiration – glamour, with runway-inspired costumes; Lady Gaga vs. Madonna; famous groups of three such as the The Supremes or The Three Stooges; hot mess; or military.

With the support of the city of West Hollywood, the Institute for Public Strategies, the Los Angeles LGBT Center, the West Hollywood Project, the Tweakers Project and APLA Health, #BOOM! aims to offer a supportive space for people with substance use or mental health issues. According to a 2014 survey from the National Alliance on Mental Illness, over 60 percent of people with mental illnesses reported their conditions worsening over the holiday season.

Often facing discrimination, people who identify as LGBT are also at greater risk for substance use and mental health issues, according to the 2015 National Survey on Drug Use and Health. The Substance Abuse and Mental Health Services Administration, for instance, found that 4.1 percent of gay men over 18 used meth compared to 0.9 percent of straight men.

“#BOOM! is a West Hollywood anchor event,” said Alexis Sanchez of the West Hollywood Project. “It’s a great place for the community to enjoy a fun night out without worry, especially considering that drugs and alcohol are still so prevalent in the LGBTQ community. Our hopes are that by creating more programming that doesn’t center around drugs and alcohol we can shift the culture away from needing to be intoxicated to have fun.”

“Crystal meth continues to be one of the major health and mental health issues in the LGBT community,” added Mike Rizzo, manager of crystal meth services at the Los Angeles LGBT Center. “It is important to provide safe alternatives to the party scene for those who are overcoming their substance use issues.”

In years past, approximately 700 people have attended #BOOM! and organizers expect that number to grow, said Sarah Blanch, director of the West Hollywood Project and co-producer of #BOOM! She emphasized the importance of the event creating a “safe place for people.”

And as Duran, who has supported other sober events in the city and the creation of the West Hollywood Recovery Center, added, “No anticipated hangovers from this event!”

Attendees must be 18 or older. Space is limited. For information and to register, visit boom2019.eventbrite.com.

The city of West Hollywood will also be running a special schedule of its free Cityline shuttle service, departing its stop near Hollywood and Highland every hour from 7:30 p.m. to 10:30 p.m., with stops at La Brea Avenue, Fairfax Avenue and North San Vicente Boulevard. Return trips from the San Vicente stop will begin at 8 p.m. and run approximately every hour with the final departure to Hollywood and Highland at 1:15 a.m.

The PickUp, the city’s free weekend ride, will run along Santa Monica Boulevard in a six-mile loop with 15 stops in each direction between Robertson Boulevard and La Brea Avenue from 8 p.m. to 3 a.m. The West Hollywood Park Auditorium is located at 647 N. San Vicente Blvd.