Counting down to a new year, new state laws

Local state legislators spent the last year working on housing reform, the environment, the criminal justice system and other laws that will take effect on New Year’s Day. 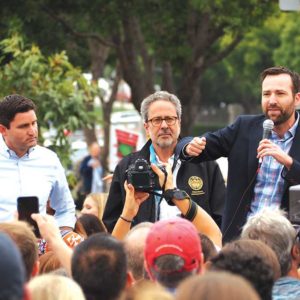 State Assemblyman Jesse Gabriel, Assemblyman Richard Bloom and Sen. Ben Allen joined a protest in Westwood over Trump immigration policy. The three were also behind several laws that will go into effect in 2019. (photo by Luke Harold)

State Sen. Holly Mitchell (D-Los Angeles) authored several bills with Sen. Ricardo Lara (D-Bell Gardens) that will contribute to their ongoing #EqualityAndJustice legislative effort to reform the state’s criminal justice system. Six bills from their initiative went into effect this year, and the following four were approved for 2019.

This bill prohibits 14- and 15-year-olds from being tried as adults in criminal court and sent to adult prison, reversing a 1990s law that allowed teens to be sentenced to the adult criminal justice system.

“In developing public policy it should be our goal to create systems based on science and results,” Mitchell said. “Research has verified for us that 14- and 15-year-olds are not pint-sized adults, and we also understand the failing of our adult corrections facilities to address rehabilitation and reentry. To expect a child to thrive in that area would be foolhardy.”

This bill, the Fair and Just Sentencing Reform Act, will eliminate automatic penalties such as mandatory five-year sentence enhancements, and return sentencing discretion to judges.

“Mass incarceration is a massive moral failure and policy failure,” Mitchell said. “It’s a moral failure because we now know that it is injurious to families and to the economies of low-income communities. We all value, respect and want communities that are safe. This will help us move in a strategic, smart way to help an overburdened, high-cost, criminal justice system.”

This bill guarantees access to Medi-Cal, CalFresh and work training programs for state residents who are released from prison after their wrongful convictions are overturned.

This bill sets the minimum age for prosecution at 12 years old.

This bill seeks to improve the Regional Housing Needs Allocation process that the state uses to help determine how many housing units regions throughout the state will need over the next eight years.

“The RHNA has not worked properly for quite some time,” Bloom said. “Local politics and flawed methodology have distorted the RHNA process and produced insufficient and inequitable housing across the state. AB 1771, by making the process more data-driven and equitable, will ensure that wealthier cities cannot skirt their responsibility to plan for and build housing. ”

This bill allows new development within the coastal zone that receives a density increase, which typically includes affordable housing units, to proceed unimpeded by the Coastal Act. A court case between Kalnel Gardens, LLC and the city of Los Angeles was decided in favor of the city, which denied the project for being in violation of the Coastal Act. Bloom said he was worried this interpretation would inhibit the Density Bonus Law, which encourages more development that includes affordable housing, in the coastal zone.

This bill will enable the Los Angeles Homeless Services Authority to  purchase the Sylmar National Guard Armory and convert it to bridge housing for homeless women. The bill started as a proposal from county Supervisor Sheila Kuehl with support from Bloom, who voted for it in the Assembly Appropriations Committee and again on the Assembly floor.

“Converting the Sylmar Armory into a 24-hour resource center will give women experiencing homelessness an opportunity to get back on their feet while providing them with a safe environment, as they look for permanent housing options,” Bloom said. “The goal of the armory is to assist these high-need individuals with resources necessary to get back into a home – something every human being needs.”

This bill will allow fair compensation for peer review panelists in the state Arts Council. The council, created in 1975, has helped bring arts programming to rural and inner-city areas, prisons, schools and other underserved areas throughout the state.

“According to the California Arts Council, time and financial burdens are the most significant barriers for panelists serving on the council,” Bloom said. “Compensating peer review panelists will allow the council to include diverse individuals who represent a broad range of artistic and cultural viewpoints and economic backgrounds.”

Many of the legislative accomplishments this year by state Sen. Ben Allen (D-Santa Monica) were aimed at protecting California’s environment by cutting down on wasteful takeout containers, protecting marine life and promoting environmental education in school districts.

This bill will remove barriers to electric vehicle ownership for residents living in condominiums by eliminating a mandate that they purchase a $1 million insurance policy on vehicle charging equipment at their condo complexes.

This bill will phase out the use of mile-long fishing nets that ensnare and sometimes kill whales, dolphins, sea turtles and other marine life. California was the only state in the U.S. to permit this fishing method.

“I’m very pleased that we now can look forward to a time not far in the future when magnificent marine creatures will no longer be injured and killed by these nets.  I am grateful to the lead supporters of the legislation, Pew Charitable Trusts, Oceana and Turtle Island Restoration Network, and hundreds of other groups, for their steadfast, effective advocacy of this measure,” Allen said.

This bill will require that all takeout food containers in food facilities operated in state parks, beaches and other state properties have to be recyclable or compostable by 2021.

“There is no reason for state facilities to continue serving food in environmentally-harmful packaging that clogs our landfills, and pollutes our parks and beaches,” Allen said. “The solution to wasteful packaging is here, it’s affordable, and the public is ready for it.”