2018 in review: Parades, Protests and Politics

Leaders in Los Angeles, Beverly Hills and West Hollywood addressed challenges facing the community head on during the past year, making progress on many fronts but leaving some uncertainties as the new year arrives. 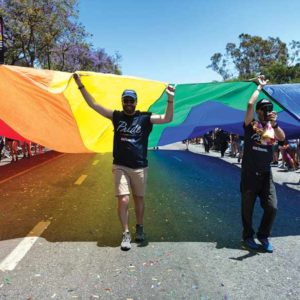 The annual Pride Parade returned to West Hollywood after a one-year hiatus when a Resist March was held. (photo courtesy of the city of West Hollywood/by Jon Viscott)

Homelessness, school safety, development, economic growth, the housing crisis and transportation were major issues in 2018, helping reshape the experiences of the people who live and visit the area. Politics also remained at the forefront, with local voters sending a resounding message in the mid-term elections, setting the stage for potentially dramatic change in 2019 in the state and federal branches of government. As a precursor to that change, hundreds of thousands of people took to the streets of downtown Los Angeles in early January 2018 to oppose what many perceive as an executive branch whose policies have run amok and are dividing the country.

Los Angeles neighborhoods like the Miracle Mile and Hollywood are constantly changing, with new multi-story buildings going up along major thoroughfares and construction of the Purple Line Extension subway project under Wilshire Boulevard rolling forward.

After years of planning and precursory work, the past year saw the beginning of tunneling for the Metro subway extension, as well as a groundbreaking for Phase 2 of the Purple Line Extension running through Beverly Hills to Century City and the beginning of construction for Phase 3 to Westwood. The 3.92-mile Phase 1 of the project from Western Avenue to La Cienega Boulevard is scheduled to open in 2023, with the entire subway line set for operation before the Olympic Games return to Los Angeles in 2028.

Fairfax High School freshman Marianne Gutierrez got a thrill in April when Metro announced she was the winner of a student contest to name the twin boring machines currently digging the tunnels Elsie and Soyeon, in honor of female engineer Elsie Eavers, the first woman to be elected as a member of the American Society of Civil Engineers, and Yi Soyeon, a female astronaut and mechanical engineer. 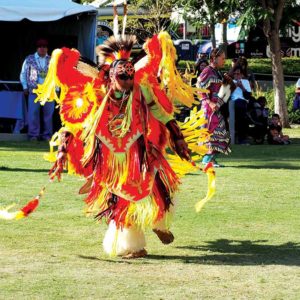 Thousands attended the inaugural Indigenous Peoples Day in the city of Los Angeles at Grand Park and City Hall. (photo by Luke Harold)

In the Miracle Mile, the Academy Museum’s spherical theater continues to take shape near the corner of Wilshire Boulevard and Fairfax Avenue ahead of a 2019 opening. Next door, the Los Angeles Museum of Art celebrated a milestone in April when artist Chris Burden’s “Urban Light” exhibit marked its 10-year anniversary. Visitors frequently snap photos among Burden’s collection of 1920s and ‘30s streetlights, which has become an iconic destination along Wilshire Boulevard.

In darker news, gun violence again plagued the nation in 2018, with a shooting at Marjory Stoneman Douglas High School in Parkland, Florida, on Feb. 14 becoming a catalyst for local civic leaders and students to call for more protections. Students throughout the city, including a large group at Fairfax High School, walked out of classes on March 14 for a 17-minute show of solidarity for the 17 people killed in the Florida mass shooting. Two survivors of the shooting also spoke on March 23 at Shalhevet High School, a private campus in the Fairfax District, calling for more progress on ending gun violence.

Homelessness is an issue throughout Los Angeles County, but was particularly troublesome in Los Angeles, where more than 31,000 people were found living on the streets during the annual homeless count last January. Although the number was slightly lower than previous years, city leaders moved aggressively to find solutions.

Mayor Eric Garcetti created the A Bridge Home program, which provides extra funding for services aimed at improving communities in council districts where sites are identified for temporary shelters. Construction of bridge housing shelters got underway in 2018 on Gardner Street in the 4th District, and on Schrader Boulevard in the 13th District, and officials are still working to find more locations for housing and ways to provide more services to the thousands of people still living on the streets in the coming year.

Development continued to be a driving force in Hollywood in 2018, with large mixed-use projects going up around Cahuenga and Sunset boulevards. The Rise Hollywood project is bringing seven-stories of housing, office and retail space to Cahuenga Boulevard just south of Sunset. Across Cahuenga Boulevard to the east, the Academy on Vine development will have three buildings up to five stories tall with offices, retail and restaurant space. 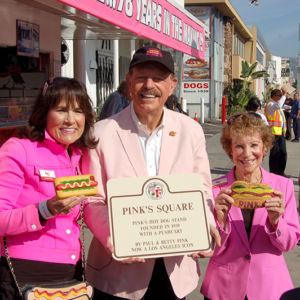 Gloria, Richard and Beverly Pink celebrated the dedication of Pink’s Square in September at Melrose and La Brea avenues. (photo by Edwin Folven)

One of Los Angeles most iconic eateries celebrated a milestone on Sept. 27 when the intersection of Melrose and La Brea avenues was designated Pink’s Square in tribute to Pink’s Hot Dogs, which has been located there since 1939. Owners Richard, Beverly and Gloria Pink celebrated with city officials and hot dog aficionados at the designation ceremony, which honored Richard and Beverly’s parents, Paul and Betty Pink, for their fortitude in creating a unique culinary destination in Los Angeles.

The city also observed a first on Oct. 8 during the inaugural Indigenous People’s Day, which replaced Columbus Day as an official city holiday. Councilman Mitch O’Farrell, 13th District, a member of the Wyandotte Nation, led the campaign to change the date and celebrate native cultures. The first Indigenous People’s Day was marked by a large gathering and concert in downtown Los Angeles featuring numerous native performers, including colorful dancers and the Native American rock band Redbone. O’Farrell said he is already looking forward to next year’s celebration.

For the last two years, the Beverly Hills Unified School District grappled with ways to reconfigure its four K-8 schools, eventually choosing in November to move forward with a plan for two K-5 schools and one 6-8 middle school. Additionally, El Rodeo School will close for two years of construction. Beverly Hills schools also got a boost in mid-2018 when voters approved Measure BH, a $385 million bond measure to fund improvements on campuses.

The city celebrated the completion of Santa Monica Boulevard reconstruction on Sept. 17, marking the end of two years of work to update and improve one of Beverly Hills’ major thoroughfares. Approximately 1.5-miles of the street were redesigned with bike lanes, raised crosswalks, curbs, gutters, landscaping and lighting. Enhancements to the drainage system were also made and a bioswale was installed to help filter pollutants from storm water runoff.

Like many other cities, Beverly Hills was at the forefront of issues involving electric scooters. Over the past year, companies like Bird and Lime flooded cities with the two-wheeled modes of transportation, prompting concerns about safety for riders and pedestrians. 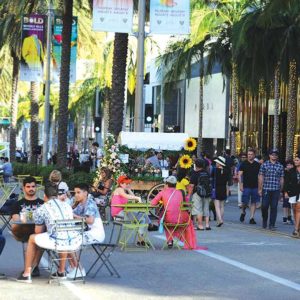 The city experienced an uptick in visitors during its first ever BOLD season last summer. (photo courtesy of the Beverly Hills Conference and Visitors Bureau)

The Beverly Hills City Council enacted a six-month ban on the electric scooters in July and recently extended the ban for another year while regulations are considered. In neighboring West Hollywood, the City Council permanently banned electric scooters in 2018, while Los Angeles has implemented a pilot program allowing 3,000 scooters throughout the city, with provisions for up to 7,500 more in “disadvantaged communities.”

Beverly Hills also celebrated the second year of BOLD (Beverly Hills Open Later Days), a series of special events that launched over summer with the goal of attracting more visitors and business to the city during evenings and nights. A party for BOLD Summer on Aug. 2 featured music, entertainment and fun activities along Rodeo Drive. The city’s BOLD Holidays program continues in the same area through the end of this weekend.

West Hollywood remained a vibrant part of the local community throughout 2018 and is poised for further growth and progress in the coming year. The city was at the forefront of the recreational cannabis industry in Southern California, with its medical dispensaries among the first in the county to sell recreational pot in 2018.

A committee assembled by the city manager announced last week applicants that will be able to receive 36 new licenses for marijuana businesses in the city. The decision was not without controversy, however, as the four existing shops granted temporary permission to sell recreational cannabis at the beginning of 2018 were not among the list of new companies vying for adult-use licenses, although they will be able to keep license to operate as medical marijuana dispensaries.

Transportation was also a major issue in West Hollywood in 2018 as the city continued efforts to bring light rail or a subway system through the city. West Hollywood City Council leaders are working with Metro to create a public transportation rail alignment connecting with the Crenshaw/LAX Corridor light rail line to the south, and the Red Line subway in Hollywood to the northeast. Solidifying plans for that initiative promises to be a primary focus in West Hollywood during the coming year.

West Hollywood also returned to one of the things the city is best known for last June when the annual Pride Parade and Festival was held. The previous year, organizers took a different approach, holding LA Pride’s Resist March instead of a parade to highlight the continued struggle for LGBT equality under the current presidential administration. The 2018 Pride Festival included a rainbow-decorated wedding cake in parody of a U.S. Supreme Court decision in early June in favor of a Colorado baker who refused to bake a wedding cake for a same-sex couple in 2012.

Numerous developments were also approved, such as the Robertson Lane Project, or are being planned, including The Arts Club on the Sunset Strip, promising additional unprecedented growth in West Hollywood in 2019.

Development and construction will be a continuing trend in 2019, with projects such as the Frank Gehry-designed 8150 Sunset development getting final approval at Sunset and Crescent Heights boulevards, and the Crossroads Hollywood project gaining planning commission approval for a hotel, housing and retail near Sunset Boulevard and Highland Avenue.

The political debate will continue in the coming year, after Democrats regained a majority in the U.S. House of Representatives in the November election, and Governor-elect Gavin Newson is poised to take office in January. Coupled with advancement along the Purple Line Extension and plans unfolding to build more permanent housing, 2019 is shaping up to be an interesting period for Los Angeles, Beverly Hills and West Hollywood. With all the change occurring and more promised for the future, one thing readers can always count on is the Park Labrea News and Beverly Press’ unwavering commitment to report on all of the issues affecting the local community.