Prang sworn in for second term as county assessor 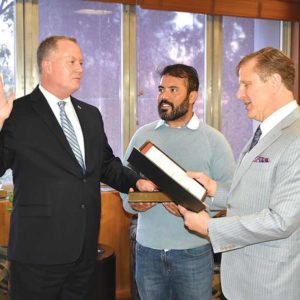 Prang (left) took the oath of office in front of more than 500 friends, family, local officials and staff at the Kenneth Hahn Hall of Administration. (photo courtesy of the assessor’s office)

In his remarks, Prang highlighted successes since taking the helm at the assessor’s office four years ago, including technological modernization and lowering backlogs in new construction processing and assessment appeals. Prang also thanked his staff and lauded this year’s record-breaking Assessment Roll value while noting simultaneous savings to a record number of veterans, homeowners and nonprofit organizations.

“I am excited for what the next four years will hold as we complete the technological innovation of the office, bring new vision to our public service and continue to dedicate ourselves to the people of this county,” Prang said.

The ceremony was held at the Kenneth Hahn Hall of Administration.

“We have achieved many of the tasks we set for ourselves four years ago, demonstrating definitively that the Office of the Assessor is an agency of which both its employees and the public can be proud,” Prang added.

“The oath I took today signifies my continued commitment to fulfill the pursuit of excellence in public service, to lead the way so that others may follow and to improve the quality of life for all families in the county.”

Mitchell sworn in for second term