Award-winning artists’ collective Rogue Artists Ensemble takes over West Hollywood’s Plummer Park through a commission from the city of West Hollywood’s Arts Division for a site-specific immersive theater experience with “Señor Plummer’s Final Fiesta,” celebrating the life of Eugene Plummer, a champion of community in early Los Angeles and a prominent figure in what is now West Hollywood. The show has now been extended through Nov. 18. 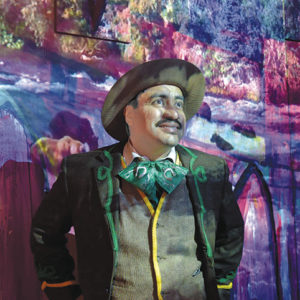 “Señor Plummer’s Final Fiesta” brings viewers into the middle of late 19th-century and early 20th-century Los Angeles as it celebrates the life of Eugene Plummer, a champion of community in early days of the city. (photo by Chelsea Sutton)

The play takes place in the Great Hall and Long Hall and the connected rooms and courtyard at Plummer Park. Audiences will experience a multitude of stories from Eugene Plummer’s past and the history of Los Angeles, and they will be able to pick and choose which paths and characters they follow.

“Señor Plummer’s Final Fiesta” runs through Nov. 18 with performances on Thursdays, Fridays, Saturdays and Sundays at 7:30 p.m. Tickets range from $35-$55, which include options for a performance with drinks provided by Angel City Brewery. A special pay-what-you-can performance will be held on Monday, Nov. 5, at 7:30 p.m. In order to be considered, fill out the survey at rogueartists.org.