The city of West Hollywood and its Transgender Advisory Board celebrate Transgender Awareness Month this November with a community awards ceremony, job fair and more, leading up to the Transgender Day of Remembrance, which memorializes victims of transphobic violence, on Nov. 20. 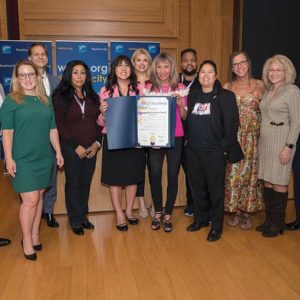 To kick off the month, the West Hollywood City Council issued a proclamation at its meeting on Nov. 5. West Hollywood City Hall, located aat 8300 Santa Monica Blvd., was lit in blue, pink and white lights to represent the colors of the transgender community, and a transgender flag was raised atop the building. The flag will be flown and the lighting will be displayed throughout the month of November.

“The city of West Hollywood has been in the leadership of acknowledging trans issues for a very long period of time,” Mayor John Duran said at the council meeting. “We protect and cherish our transgender community members, and we want to thank the Transgender Advisory Board for being the voice for the trans community, not only here in the city of West Hollywood, but the policy and the positions that you advocate here often reverberate and end up getting copied in other communities and cities around the country.”

Transgender Advisory Board Chair Alexis Sanchez accepted the proclamation with other board members, thanking West Hollywood for its advocacy and support for the trans community.

“I would just really like to thank the city for always being on the cutting edge. This framework that has been laid for the last few decades has really allowed countless generations to grow up and feel like they have a place in the world, which very often isn’t the case,” Sanchez said. “I work with a lot of transgender teens and I do a lot of mentorship in that role. Often times, teenagers can feel really powerless in this world – they don’t have the ability to vote yet, they are very much under the discretion of their parents – so when they see messages in the media, when you see the cities like the city of West Hollywood which just pave the way and continually give these positive messages of support, it goes a long way towards them feeling like they have a shot in the world.”

On Wednesday, Nov. 7, at 6 p.m., the Transgender Advisory Board hosted its annual Awards Presentation at the city’s Council Chambers/Public Meeting Room at the West Hollywood Library, located at 625 N. San Vicente Boulevard.

The awards, acknowledging community members and organizations for their work in the transgender community, were presented to Project Q, a nonprofit organization that gives more than 700 free haircuts to LGBTQ homeless youth annually, and Mariana Marroquin, manager of the Trans Wellness Center.

Additionally, the city, in conjunction with the Los Angeles LGBT Center’s Transgender Economic Empowerment Project, will host a Transgender Job Fair on Thursday, Nov. 8, from 11 a.m. to 2 p.m. at the West Hollywood Park Auditorium, located at 647 N. San Vicente Boulevard. More than 40 companies and businesses will participate, and the event will include job training resources, a mock interview clinic and a photo booth for professional headshots. Admission is free.

On Sunday, Nov. 18, JQ International will host its third annual Trans Equality Brunch at the city’s Council Chambers/Public Meeting Room at the West Hollywood Library. The event will feature a panel discussion with members of the transgender and genderqueer community.

Attendees will hear the voices, stories, and experiences of diverse and accomplished transgender and genderqueer community members. Admission is free.

On Tuesday, Nov. 20, the Transgender Advisory Board will host the Transgender Day of Remembrance Ceremony at The Jeremy Hotel, located at 8490 Sunset Blvd., featuring transgender speakers and performers. The names of transgender people who have passed away due to hate crimes will be read at the ceremony.

The flags at City Hall will be flown at half-staff in remembrance.

A march will immediately follow the event. Attendance is free. For information, contact Bonnie Smith at bsmith@weho.org or (323)848-6371.