Entrepreneurs under 40 shared their stories of success with approximately 20 other young West Hollywood residents at the “Next Gen: Bringing You the Business” event at the Pacific Design Center on Tuesday, Nov. 13. The panel included business leaders from a real estate company, a tech company recruitment firm, an e-commerce site for lighted vanity mirrors and a pop-up restaurant inspired by the ‘90s show “Saved by the Bell.” 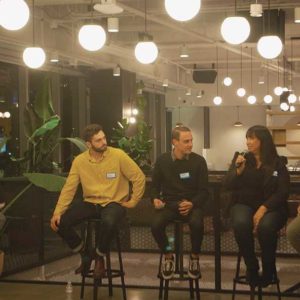 “West Hollywood is going to become the economic engine of this entire Southern California region in the next 10 years,” said Jake Stevens, director of community engagement for real estate company Faring. “We’ve looked around at our offices right there on Robertson across from The Abbey and realized that, why would we go anywhere else?”

Councilwoman Lindsey Horvath hopes the dialogue, a part of the city’s NextGen meeting series launched in 2017, will inspire people under 40 to get involved with West Hollywood civic life.

“Almost 50 percent of our city is under the age of 40, [but] you wouldn’t always be able to tell it by who shows up at city events or City Council meetings,” Horvath said. “What we’re trying to create is a space for people who might feel that they might not belong in other places.”

The evening’s topics touched on finding funding for beginning entrepreneurs – family and friends are a good place to start, the panelists said – as well as what makes West Hollywood optimal for business ventures and social media tips like using Instagram Live, among other subjects.

As to the ideal time to forge a new path and start a business, the four panelists all agreed that starting a new business is less about specific timing and more about dedication.

“The timing is when you decide that you’re ready to do it and commit every fiber and moment of your life to doing that,” Stevens said. “If you as the CEO and business owner do not bleed, sweat and speak your business every moment of your existence, how can you expect an employee or an investor to do the same thing?”

Tatlonghari said she always had an entrepreneurial streak, but didn’t act on it until she was laid off from a comfortable job with benefits at a nonprofit.

“Then it became about necessity,” she said. “I took myself over to Burke Williams and got myself a massage and a facial – because that’s the kind of girl that I am – and I sat in their vanity room and I was like, ‘I feel like other people want to feel like this.’ So, I sketched [my mirror idea] out on a napkin and took it to a manufacturer … It starts with passion.”

The West Hollywood City Council and Chamber of Commerce also received praise throughout the evening for creating a business-friendly atmosphere in the city.

“Meeting with people in the City Council and our first trip to West Hollywood City Hall, they were like, ‘What can we do to get this here? What can we do to help you?’ And when we went to the other city halls … it was like, ‘You are a what pop-up?’” said Berry, who initially started his Saved by The Max eatery in Chicago before bringing it to the West Coast.

Cherin, who established Secret Sauce in West Hollywood five months ago added that “people believe in what’s going on here.”

“One of the things that we struggled with while starting a business was this feeling of legitimacy. The first place that legitimacy comes from is usually you and your mom, and after that you’re out in the void looking for legitimacy. But for us, [it was] as soon as we filed our business license in West Hollywood,” Cherin added. “That was such a motivating factor to know that we have the city behind us.”

No matter the location, for all entrepreneurs and business owners, the panelists advised keeping a journal, not waiting on an idea or being afraid to ask for help, and not taking everything seriously.

“Being a business owner, you’re on this rollercoaster of ‘I feel like I can conquer the world’ and ‘I’m completely worthless and I have no idea what I’m doing,’” Cherin said. “I think I would tell my younger self to close the extremes – ride the highs, but don’t ride them as high. Stay grounded when you’re up there. And those lows are never as low as you think they are.”

For information on business development in West Hollywood, visit weho.org/business.