While the votes from Tuesday’s midterms are still being counted, the West Hollywood City Council added a ballot measure to the city’s upcoming March election asking residents whether to approve a recreational cannabis tax. 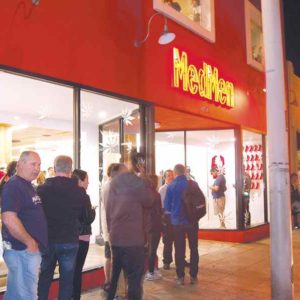 Med Men is one of West Hollywood’s medical cannabis dispensaries that has been selling recreational cannabis with a temporary permit. (photo by Edwin Folven)

West Hollywood Mayor John Duran said he will “feverishly campaign in favor of that cannabis tax.”

“It is a great source of revenue to help us fund public safety and homelessness programs and all sorts of other priorities for the community,” he said. “I think the people of West Hollywood will likely agree with that and hopefully support the passage of that cannabis tax.”

West Hollywood Mayor Pro Tempore John D’Amico said he would have liked to have more input from the businesses that will be subject to the tax.

“I’m a little concerned that we’re putting a tax on a product for businesses that don’t yet exist and I’m not certain I support this,” he said. “I support us putting it on the ballot because it’s never a problem to get the voters’ input.”

D’Amico added that he wants more information and “an updated timeline that will give us a better idea of who will have these licenses and what their thoughts might be on how those taxes will affect whether or not they will be successful or not going forward.”

There were no public commenters on this agenda item.

The city established a cannabis application evaluation committee to sort through the businesses that will be considered for cannabis licenses in at least one of five categories: adult-use retail business; consumption area for smoking, vaping and ingestion with on-site adult-use retail; consumption area for edible ingestion only with onsite adult-use retail; medical-use dispensary; and cannabis delivery services based in West Hollywood. The city received 313 applications from 122 applicants by the close of its May 31 deadline. By Dec. 7, the top eight finalists will be announced.

There are also an unlimited number of licenses available for cannabis delivery services based outside West Hollywood for delivery within West Hollywood.