Following the West Hollywood City Council’s approval in September of a Sunset Strip redevelopment project that would house the upscale Arts Club, Unite Here Local 11, a union that represents hospitality workers in hotels, restaurants and similar industries in Southern California, is pushing back. 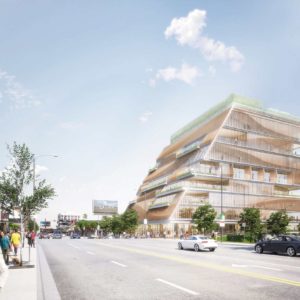 The nine-story project will be a mixed-use commercial building with retail and restaurant space, offices, a performing arts rehearsal room, a public art gallery and The Arts Club. (rendering courtesy of the city of West Hollywood)

The union chapter has gathered enough signatures to put a measure on the city’s March 5 ballot that could overturn the project’s approval.

“The city of West Hollywood should stop rubber-stamping massive, luxury development without providing meaningful community benefits such as housing to residents and workers. The Arts Club is a prime example of this,” said Danielle Wilson, a research analyst for Unite Here Local 11. “The project is anchored by an exclusive, membership-only club that our members and the vast majority of West Hollywood residents would not be able to access.”

The project, by VE Equities and London & Regional Properties, will redevelop the site of adult store Hustler Hollywood into a nine-story mixed-use commercial building with retail and restaurant space, offices, a performing arts rehearsal room, a live music space and a public art gallery. It will also host The Arts Club, a private organization founded in 1863 in London by Charles Dickens and other artists, which will feature a restaurant, lounge, guest rooms and rooftop pool.

The new 120,000-square-foot building at 8920 Sunset Blvd. would be the club’s first venue in the United States, and would offer a space for artists, writers and performers to connect. To join The Arts Club in London costs the equivalent of more than $2,000 annually, in addition to an initial fee of more than $2,000. The membership costs have not yet been disclosed for West Hollywood.

The redevelopment plan passed with a 4-1 vote and over 30 residents voicing their support at council meetings in August and September. However, Wilson said that union representatives met extensively with council members prior to the project’s approval to discuss their concerns regarding “meaningful community benefits, such as affordable housing” that they believe the project lacked.

“We are experiencing a statewide housing crisis, and an affordable housing crisis in West Hollywood,” Wilson said. “In a dense city like West Hollywood, any and all available land for housing development should be used as such. It should not be used to develop massive, exclusive clubs intended to attract celebrities and tourists with little regard for actual residents.”

More than 2,800 West Hollywood residents signed in support of the referendum within 30 days of Unite Here launching a campaign. A 60-person coalition knocked on doors throughout the city, according to the union.

The mayor also emphasized the importance of The Arts Club passing over places like New York or downtown Los Angeles for West Hollywood to establish its first location in the country, adding that the city is “very prosperous.”

“I look forward to leading this campaign against this initiative,” he said. “Other outsiders have come in and failed, and I think Unite Here is going to fail as well.”

Councilman John Heilman, who voted against the redevelopment in September, disagrees with the union’s turn to the ballot referendum. His objections stem from the building’s proposed size, not the club itself, he said.

According to West Hollywood City Clerk Yvonne Quarker, the City Council will discuss the referendum and the city’s options at its next meeting on Nov. 19.

“Regarding organizations coming into the city and gathering signatures on petitions, the elections code allows for this as a way for residents to have the opportunity to decide whether they are in favor or against a decision that is made by their City Council,” Quarker said. “As a city, we always encourage people to read what they are signing and we make ourselves available to provide any additional or clarifying information they may need regarding projects, policies or laws approved by the council.”