Detectives are releasing very little information about a double homicide that occurred on Nov. 12 at a marijuana dispensary at 477 S. Western Ave. in Koreatown. 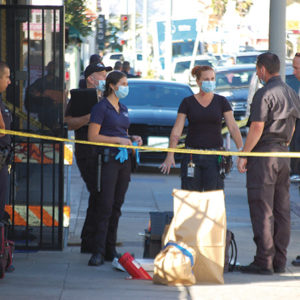 Coroner’s office employees consulted with LAPD investigators outside a marijuana dispensary on Western Avenue where two people were shot and killed on Nov. 12. The homicides remain under investigation. (photo by Edwin Folven)

The homicides were reported at 4:20 a.m. by a female employee of the Koreatown Exotics dispensary, said Det. Herman Frettlohr, with the Los Angeles Police Department’s West Bureau Homicide Unit. The employee and an undisclosed number of customers were in one room of the dispensary when they heard gunshots in a separate waiting room. The employee called police and everyone present in the room fled through a rear door. Officers arrived and located the two male victims in the waiting room. They were pronounced dead at the scene.

The Los Angeles County Coroner’s Office identified the victims as Manuel David Corral Jr., 36, of South Pasadena, and Lamont Leroy Farmer, 42, of Lomita. A security guard was present at the dispensary, Frettlohr added. The detective said the dispensary was open for business but declined to provide any further information.

“We don’t know who was responsible,” Frettlohr added. “We are not actually sure about the status of the legality [of the dispensary].”

The Los Angeles Department of Cannabis Regulation lists all licensed medical marijuana and recreational marijuana dispensaries operating in the city on its website. There is no entry for Koreatown Exotics or any other dispensary at 447 S. Western Ave.

Frettlohr said there had not been any previous issue reported at the site. Detectives determined that a different medical marijuana dispensary had previously operated at the site and he did not know how long Koreatown Exotics was in operation. Per a city of Los Angeles ordinance, dispensaries are only allowed to operate from 6 a.m. to 10 p.m., and it being open at 4:20 a.m. was itself a violation of the law.

Los Angeles City Attorney’s Office spokesman Rob Wilcox said the office does not have any complaints or criminal filings pending against any dispensary at 477 S. Western Ave.

“Our office has reached out to the LAPD for additional information,” he added.

“Marijuana dispensaries need to be cognizant of who they are letting in,” he said. “Having many people inside and operating after hours invites danger.”

Anyone with information about the murders is urged to contact investigators with the LAPD’s West Bureau Homicide Unit at (213)382-9470. During weekends and off-hours, call (877)LAPD247.

LAUSD makes it easier to volunteer