The stars align at Ocean Prime in Beverly Hills

While sitting on the elegant al fresco terrace at Ocean Prime near a DJ spinning lively tunes, one of my favorite actors and singers Daveed Diggs, who played Thomas Jefferson and Lafayette in the original casting of “Hamilton,” passed by my table with actress and singer Emmy Raver-Lampman, who starred as Angelica Schuyler in the “Hamilton” touring company. You just never know who you might spot while dining on the sophisticated steak and seafood dishes at Ocean Prime in Beverly Hills. 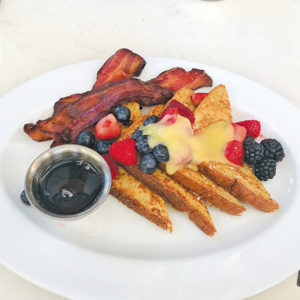 The French toast at Ocean Prime comes with candied bacon to add a savory, salty zing to the sweet dish. (photo by Jill Weinlein)

Visiting for brunch, we began our meal with drinks, deciding between the bottomless mimosas or the bloody mary. Learning that the mimosas can be ordered with either fresh orange or blood orange juice, my husband and I ordered one of each. The drinks were delicious, striking the perfect balance of tart and sweet.

The brunch menu features a number of appealing dishes including the lobster and avocado toast, which spotlights butter-poached lobster pieces on a creamy sweet pea and avocado spread. A perfectly cooked egg bathes the toast in yolk when cut, adding a savory touch to the earthy flavors. For a tangy dimension, a side salad of arugula with pickled red onions and preserved lemon accompany the plate.

My daughter ordered the jumbo lump crab cake and eggs on a thick English muffin, which included a delectable light hollandaise sauce and sprinkle of paprika. The dish was also served with a small bowl of cut pineapple and cantaloupe, and a small mixed green salad with a pleasing balsamic vinaigrette.

Friends who had dined at Ocean Prime highly recommended the surf ‘n’ turf with short rib. When we ordered it, it arrived stacked with a crispy gouda potato cake as the bottom layer – almost like a thick latke – topped with tender, melt-in-your-mouth slow-braised short ribs. On top was a large butter-poached lobster claw, a poached egg and then hollandaise sauce. It’s a showstopper.

Other brunch dishes include an everything bagel with smoked salmon and fixings; ahi tuna tartare; prime steak tartare, a variety of sushi and salads, a prime cheeseburger and a quiche with spinach, provolone and Parmesan.

Craving something sweet, we ordered the French toast served with candied sweet and crunchy bacon on the side. The toast was topped with sweet red and purple berries, as well as a dollop of lemon curd and a pour of warm maple syrup. It’s just one of the many stars found at Ocean Prime.

On Sunday evenings, the chefs prepare a multicourse special surf ‘n’ turf dinner for $60 per person. For the holidays, purchase a $100 eGift card and receive a $25 eBonus card now through Dec. 30. The eBonus card is valid for use at any Cameron Mitchell Restaurants location nationwide, Sunday through Thursdays, from Jan. 2, 2019, through Feb. 28.

The Grove rings in the holidays