What is the purpose of a biopic? Speak the truth. Represent history in its entirety. To favor one over the other rarely occurs, and the goal for most critics is something in the middle that rings true enough to make all parties involved uncomfortable but streamlined enough to move the plot forward. 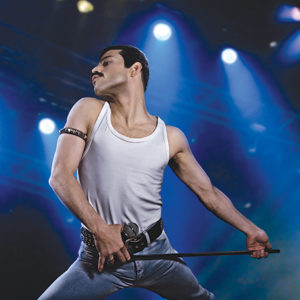 “Bohemian Rhapsody” certainly takes liberties with the story of Queen, but its more positive tone has been met with a large degree of resistance. Quartz calls it “cautious and inoffensive,” while the eternally pretentious Paste magazine oh-so-cutely claims the film “non-ironically” copies the comedy “Walk Hard.” That’s like dismissing “The Force Awakens” because it channels the original 1977 blockbuster. So what? “Straight Outta Compton” is formulaic too, even painting the N.W.A members as rather blameless despite Dr. Dre’s violent assault on journalist Dee Barnes in 1991, and it received a screenwriting nom.

Noting correlation doesn’t prove a point any more than dining at a gastropub ensures fine cuisine. For that matter, criticism surrounding “Rhapsody” seems to dwell on what could have been. That’s certainly warranted, but it still serves as faulty reasoning to condemn what’s here. One filmmaker says it best.

“Most criticisms I’ve read about the film say it could’ve been something more,” tweeted filmmaker Scott Derrickson (“Doctor Strange,” “Sinister”), whose understanding of film theory and history rivals most paid columnists. “But I refuse to judge a film by [what] I wanted it to be, I receive it for what it is.”

And “what it is” certainly counts as historical revision, a lighter take on a story that ends in tragedy for a titan of rock. This is particularly prevalent when Mercury tells the band he has AIDS prior to their performance at Live Aid in 1985, two years before his actual diagnosis. The scene adds dramatic weight to an event witnessed by nearly 2 billion, but to call this decision “perverse,” as IndieWire’s David Ehrlich does, claiming it “retcons Mercury’s HIV diagnosis as the band’s motivation for Live Aid,” both misinterprets what occurs in the moments leading up to the reveal and places exaggerated importance on the narrative revision.

Revision runs rampant in biopics. “Lincoln,” for example, condenses history and several historical figures into a few representative characters and, in fact, suffered from a dash of realism tacked onto the end.

But smoothing of many of Freddie Mercury’s edges is clearly problematic. Not quite the sin of “The Greatest Showman,” a delightful film about a vile man, but a step down an easier path. That’s to be expected of a biopic developed while bandmates still live. This is standard procedure: storytelling with a stamp of approval from those directly involved. Journalists are rightly disturbed by such a precedent, but filmmaking is different terrain. So “Rhapsody,” Unbroken,” “Compton” and “The Theory of Everything” reach the silver screen at the privilege of surviving parties who own the story rights, a point championed as authenticity by filmmakers and deemed suspicious by those who question the accuracy of such choices.

But in most cases, these films are praised as long as they are considered art, not history. That’s the only way to watch best pic winner “The Hurt Locker,” a wildly inaccurate depiction of military practices.

Perhaps the real problem at the heart of this film is its director, Bryan Singer, was fired from the project, marking the second time Fox did so. He was notoriously removed from the “X-Men” franchise before production for the third film began. This is a classic example of a film studio rewarding bad behavior with more projects, but the “Usual Suspects” director might be in more trouble now that #MeToo found him (he weathered rape accusations a while ago too).

The central tragedy here surrounds the inconsistency of gay directors telling stories about LGBTQ icons. While actor Rami Malek might be straight, he at least ethnically comes closer to Mercury than all the whitewashed alternatives Fox certainly considered and does so under the direction of a high-profile gay director (this is all before the latest round of allegations against Singer). Gus Van Sant’s “Milk” is the only other notable example.

“Rhapsody” should be a crowning achievement and an easy nom for Malek, a rising TV sensation with more to offer cinema, but Singer’s reputation and the many liberties of a screenplay by Anthony McCarten – who favors such historical dramatization in “The Theory of Everything” and “Darkest Hour” (he’s currently attached to a Lennon/Yoko project as well) – outshine some incredible performances and effective use of popular music’s richest catalog. It’s not a victory, but not the cinematic bust too many claim it to be. Again, Derrickson’s social media wisdom abounds.

“Finally, after so many tweets about ‘Bohemian Rhapsody,’” he said,” I’ll clarify that yes, I really enjoyed it, but it’s not even close to one of the best films I’ve seen this year.”

The Queen biopic might earn Malik a few praises along the way and a ceremonial Golden Globe nom to fill the comedy-music category, but it’s hardly a complex portrait that does more than fill a couple hours with great music and an exoskeleton of truth. That’s fine, not great.