Los Angeles City Attorney Mike Feuer announced that his office has secured a judgement requiring more than $1 million in restitution for workers at Silver Lake Car Wash and Catalina Car Wash who were allegedly deprived of minimum wages, overtime and rest breaks on a routine basis. The workers were also allegedly subjected to intimidation and witness tampering throughout the course of the litigation. 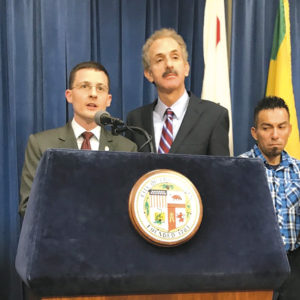 The settlement is the result of a collaboration among the City Attorney’s Office, the California Labor Commissioner’s Office, the Bet Tzedek Employment Rights Project and the Community Labor Environmental Action Network.

“Hard-working men and women have the right to decent working conditions, at least a minimum wage and overtime,” Feuer said. “This settlement sends a strong message to employers across our city that we take allegations of wage theft and mistreatment of workers seriously. My office will fight to ensure all workers receive the respect they deserve and are paid what the law demands.”

Under the terms of a stipulated final judgement, Silver Lake Car Wash, Inc., Catalina Car Wash, Inc., and the primary supervisor at the two car washes, Yoosef Aminpour, have agreed to pay $1,084,972 in restitution to individuals employed at the car washes from Jan. 18, 2014, through June 30, 2018. Qualified employees will be contacted and instructed on how to submit a claim. Those who submit a claim will receive wage reimbursement through a qualified third party administrator paid by the defendants.

The defendants have also agreed to pay $519,027 in civil penalties, as well as $35,996 in litigation costs to the city attorney’s office.

The defendants will also be placed under a four-year injunction requiring compliance with all applicable wage and hour laws and regulations including mandatory meal and rest breaks for all employees, providing all necessary equipment to perform job responsibilities including boots and gloves, adopting accurate time keeping procedures for employees and providing a regular biweekly pay schedule with itemized statements on each paycheck.

The complaint alleged that Silver Lake Car Wash, located at 3595 Beverly Blvd., and Catalina Car Wash, located at 4000 Beverly Blvd., paid workers a daily rate as low as $45 dollars per day for 10 hours or more of work – effectively a $4.50 per hour rate. The amount is far below the applicable minimum wage and employees received no overtime, Feuer said. When the car washes shut down early because of lack of customers, employees were allegedly not paid.

Feuer urged other workers who may be the victims of wage theft to file a report with his office by calling (213)978-1868, or e-mailing mike.n.feuer@lacity.org. Complaints may be filed anonymously.

‘Ralph Breaks the Internet’ is the ‘Ready Player One’ we deserve

[…] Wash and Catalina Car Wash, along with their primary supervisor, Yoosef Aminpour, have agreed to pay $1,084,972 in restitution to those they employed from early 2014 to June of this year. The defendants also […]