Many Angelenos are rent burdened, paying 50 percent or more of their incomes to their landlords, but the issue is especially acute in the 13th Council District, where approximately 80 percent of residents are renters. 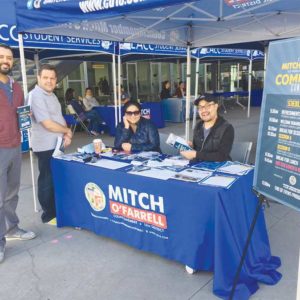 Last weekend’s community conference was the third in a series of community meetings O’Farrell has held. (photo courtesy of the 13th Council District office)

“That means we’re having to make decisions on what our daily lives look like,” said Carlos Aguilar, an organizer for the nonprofit Coalition for Economic Survival. “Do we cut down on our medication? Do we cut down on how much food we eat? Do we not take transportation, do we walk? Those are real-life issues that a lot of folks have to deal with when they’re paying more than 50 percent of their income into rent.”

Renters’ rights were among the topics discussed at a community conference for Hollywood and East Hollywood at Los Angeles City College on Nov. 17 hosted by Councilman Mitch O’Farrell, 13th District.

Panelists in the renters portion of the event were from organizations including the Los Angeles Housing and Community Investment Department, a city-sponsored organization that deals with affordable housing issues, and Inquilinos Unidos, a tenant advocacy group. One of the most basic problems tenants face during disputes with landlords, they said, is not being able to provide documentation. Accusing a landlord of taking an inordinately long time to make an urgent repair, for example, will require written proof in court. A text message will suffice.

Another session in the community conference focused on strategies for housing the homeless. Despite a slight decrease in homelessness from 2017 to 2018, according to the annual homeless count results, there are still more than 30,000 homeless individuals in the city of Los Angeles. Council District 13 ranked third among the 15 council districts in the number of homeless individuals. O’Farrell’s recently announced Heart of Hollywood initiative is one of the ways the councilman plans to address housing in his district. The initiative will also cover plans for “preserving and revitalizing the historic core of Hollywood Boulevard; housing; attracting quality investment; improving the built environment; and creating a sustainable, vibrant neighborhood where people can live, work, and have quality experiences,” according to a news release.

O’Farrell, who held two previous community conferences this year, one in Glassell Park and another in Silver Lake, said he and his team make the sessions “as worthwhile as possible.” The councilman added that his first City Council campaign in 2013, when he initially won his seat, taught him the benefits of offering value to the community.

“That comes in the form of resources, city resources that are available to constituents who don’t often even realize that there are amenities available from the city and the county and other agencies that they can simply have access to by making a phone call or by sending an email or by calling our office,” he said.