‘Ralph Breaks the Internet’ is the ‘Ready Player One’ we deserve 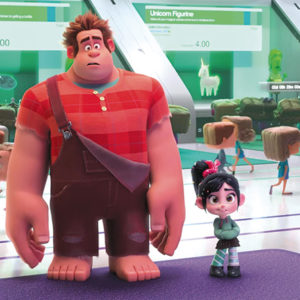 Ralph (John C. Reilly) and Vanellope (Sarah Silverman) team up for an adventure in “Ralph Breaks the Internet,” an energetic sequel to “Wreck-It Ralph.” (photo courtesy of Disney Animation)

This culminates in a sequel on par with and in many ways better than the first film. Dare I even say a more worthy frontrunner for best animation film than any other entry this year (perhaps “Spider-Man: Into the Spider-Verse” will surprise us all come December). Sure, it’s a formulaic journey into the World Wide Web that expands beyond video game culture into pretty much everything popular, but it does so with such charm.

The last we saw Ralph (voiced by John C. Reilly), he was an arcade game villain tired of always playing the bad guy. Now, with the help of his new bestie Vanellope (Sarah Silverman), whom he affectionately continues to call kid, he loves life. But she’s less enthused, tired of racing the same three tracks in her game. Of course Ralph’s attempt to cheer her up results in trouble and the pair must venture online to find a solution.

“Wreck-It Ralph” embraced a modest level of a classic gaming nostalgia. That same spirit goes viral as we encounter the best and worst the internet has to offer. Pop-up ads, a search engine with an overexuberant auto-fill, YouTube videos, more intricate and equally violent video games, and even vile comments threads.

Internet culture evolves at an exponential rate, but “Ralph Breaks the Internet” takes a step back to highlight several significant moments. And as a Disney film, we get all the pop culture references “Ready Player One” couldn’t deliver, from every possible Disney princess and other familiar characters to “Star Wars” and Marvel nods as well.

As usual, Ralph functions as the everyman thrust into a whole new world. Vanellope loves every moment, but not him. Too bad, because all those princesses provide two of the best sequences in the film, complete with many returning voice actors (Mandy Moore, Anika Noni Rose, Kristen Bell, Ming-Na Wen, Auli’i Cravalho, Idina Menzel, Jodi Benson) and a satisfying level of self-referential humor. And you better believe we get a song. No spoilers on what or who.

To be honest, the “Ralph” films aren’t laugh-out-loud yarns. They’re cute, wholesome, filled with smiles amidst their over-abundance of Easter eggs. But what they lack in humor, they compensate for in delight. This sequel, in particular, might structurally veer down familiar terrain, but it doubles down on emotion. Ralph and Van have their friendship tested in a way that’s quite real, eyes-watering real.

Along for the ride is a sea of wonderful vocal performances like Alan Tudyk as search engine KnowsMore, Bill Hader as J.P. Spamley (you can guess what he is), Gal Gadot as a stunt driver in “Slaughter Race,” the film’s version of “Grand Theft Auto” and Taraji P. Henson (“Empire”) as Yesss, who knows how to make any video go viral. Perhaps the only disappointment is the general absence of returners Fix-It Felix (Jack McBrayer) and new bride Calhoun (Jane Lynch), who merely bookend the film. Still, their final moment is a good laugh.

While “Ralph Breaks the Internet” dabbles with the unsavory sides of digital life – cyberbullying, viruses, internet celebrity – it never becomes bogged down in pessimism. For that matter, a true villain never appears. Oh well. The violence and video games debate is tired and we already have our options of other films that feature deplorable villains. Ralph doesn’t need a central antagonist to get in his own way, anyways. He is a reformed villain after all.

“Ralph Breaks the Internet” might be drunk on its own concept, packing in countless tips of the hat to everything we love and forgot from the internet and pop history. That doesn’t mean it fails to tell a story despite those superficial attributes. Complimenting this nostalgia overload is an enduring story about a friendship that must evolve, colorfully wrapped in vibrant CGI and an exhilarating adventure.