Play at The Wallis explores experience of being black in America

“The Bitter Game,” an immersive theater experience ripe with pain, poetry and laughter that explores the experience of being black in America, debuts at the Wallis Annenberg Center for the Performing Arts on Wednesday, Nov. 14, through Saturday, Nov. 17, at 7:30 p.m., outdoors on The Wallis’ Promenade Terrace. 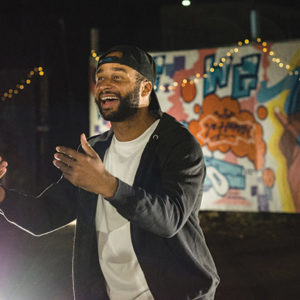 “The Bitter Game” tells the story of Jamel Smith, who witnesses a neighborhood act of violence as a child and later must learn to navigate his interactions with police. (photo by Jim Carmody)

Playwright-actor Keith A. Wallace’s multi-character, solo performance in five acts, structured as the four quarters and overtime of a basketball game, tells the story of Jamel Smith, who witnesses a neighborhood act of violence as a child and later must learn to navigate his interactions with police. Based on Wallace’s youth in Philadelphia, “The Bitter Game” is created, written and performed by Wallace, co-created by Deborah Stein and directed by Malika Oyetimein.

“With ‘The Bitter Game’ performed outdoors in a nontraditional theatrical setting, we bring audiences up close to Keith Wallace’s very direct style of storytelling that explores the issues that have informed and given rise to the Black Lives Matter movement,” The Wallis’ Artistic Director Paul Crewes said.

Wallace hopes the play will eventually reach beyond the theater to be used as a tool of sensitivity training for law enforcement, and performed with schools and communities reflected in the story.

“The Bitter Game” was commissioned by the La Jolla Playhouse for the International WoW Festival while Wallace was still a graduate student at UC San Diego. Since its debut, “The Bitter Game” has received critical acclaim not only from The New York Times but also the Los Angeles Times and the San Diego Tribune.

It has toured internationally, making stops at the Skirball Cultural Center, The Public Theater, The Kennedy Center, The American Repertory Theater and the Dublin Theater Festival. The play also won the 2016 Princess Grace Theater Award and was a semi-finalist in the 2016 Sundance Theater Lab and the Eugene O’Neill Playwrights Conference.

Warm attire and comfortable shoes are suggested for audience members, who are also warned to expect the play’s strong language.

A post-show discussion takes place immediately after the Friday, Nov. 16, performance. A sign language-interpreted performance is held on Saturday, Nov. 17.

Pop Art works at the Broad