The Petersen Automotive Museum has partnered with Motor Trend Group, formerly known as TEN: The Enthusiast Network, to digitize 1 million images from the Petersen Publishing Archive. The project is now publicly available through the museum’s website. 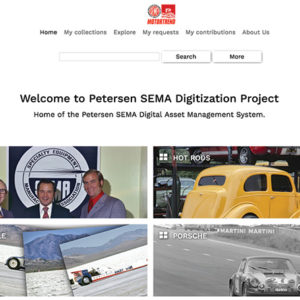 Tthe Petersen Publishing Archive is a collection of physical photographic negatives and transparencies that were originally shot for Petersen publications between the 1940s and ‘80s. (photo courtesy of the Petersen)

Made possible with a grant from the Specialty Equipment Market Association, the Petersen Publishing Photo Archive Digitization Project has culminated in a publicly available database that preserves Petersen Publishing’s contributions to automotive history and culture in an increasingly digital world.

Consisting of more than 10 million images, the Petersen Publishing Archive is a collection of physical photographic negatives and transparencies that were originally shot for Petersen publications between the 1940s and ‘80s. Source Interlink Media conducted an initial digitization effort of 500,000 images, however, SEMA’s interest in the archive and subsequent generosity allowed the Petersen to hire three full-time staff members to accelerate the process.

Led by Petersen Archivist Laura Fisher, Petersen Director of Technology Alex Rosales and Motor Trend Group Archivist Thomas Voehringer, the project team consisted of passionate automotive historians and film preservationists who evaluated the significance of the collection as a whole.

“Our namesake Robert E. Petersen single-handedly built the world’s largest special-interest publishing empire,” Petersen Museum Executive Director Terry L. Karges said. “It is up to us as the gatekeepers of his empire to preserve the archive of Petersen Publishing materials by sharing it with the public digitally. This project has helped propel the Petersen to the forefront of automotive thought for future generations to come.”

The Petersen Museum is located at 6060 Wilshire Blvd. For information, archive.petersen.org.