Amid the bustle and traffic around Sixth and Western, Westmor Dance Studio, tucked away in a three-story building just one block away from the Wiltern Theatre, can get overlooked – something owners and husband-and-wife duo Lilia and Valdas Padriezas admitted and hope to change. Touting the benefits of dance for everyone and the towering figures who have emerged from the studio, including Shirley Temple, the couple is striving to tell the stories of the studio’s past. 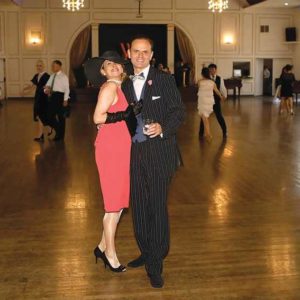 “The building is quite historical,” Lilia Padriezas said. “Cecil B. DeMille founded it in the early 1930s to train dancers for movies. It had been built to train the best.”

Founded originally as the Ernest Belcher Dance Studio, the workspace was gifted by DeMille to Belcher, a British dancer and choreographer who had staged dances at the Hollywood Bowl and worked on films such as the 1925 “Phantom of the Opera” and 1927’s “The Jazz Singer.” From that space, Belcher coached jazz, ballet, tap dance and more to famed dancers including Fred Astaire, Cyd Charisse, Gwen Verdon and Maria Tallchief, among others. Belcher’s dedication to dance, as a result, landed him the title of the “father of ballet in Southern California,” Lilia Padriezas said.

“All those legends have danced on this floor,” Lilia Padriezas added. “The space at Westmor has its own energy.”

In 1958, the studio switched hands to John Morton and his wife Jill Weston, who renamed the studio Westmor by combining their last names, but held on to the studio’s prestige, even as its focus shifted more to ballroom dance, training students for competitions and hosting national and international ballroom events as well.

It was through ballroom dance that Lilia and Valdas Padriezas, who had both trained and competed in the dance style to help them leave the then-Soviet-controlled Lithuania, learned of Westmor and began coaching there in 1993. Twenty-five years later, in January 2018, the pair decided took the lead and bought the studio.

As the new owners, the Padriezas hope to revitalize the space, which features a large dance floor that can accommodate close to 500 people on the building’s third floor, with new energy. They have 15 teachers, as well as guest teachers including salsa champion Francisco Vazquez and Spanish international champion Fernando Lareu, and offer a range of classes from the basic foxtrot and waltz courses to cha-cha, samba and advanced Argentine tango.

“It’s a good opportunity to become healthier and stronger,” Valdas Padriezas said. “When you dance, you work on the center of the body, you connect with different energies of the body … After class, people leave tired, but happy.”

While the Westmor still looks to train professional ballroom champions, the Padriezas emphasize that the studio encourages students of all levels, ages and backgrounds to try a ball change, box step or chassé as well and meet new friends along the way as they change partners throughout classes.

“Everybody can dance,” Lilia Padriezas said. “Ten minutes into the class, and people already feel like they can dance. They may think they have two left feet, but then they find out they have the right foot as well.”

“We have people coming in their 80s, and they look like they’re in their 50s or 60s,” Valdas Padriezas added. “I even had a student who doctors told needed spinal surgery, but after a few years of dance, her spine had corrected and she didn’t need the surgery anymore.”

The husband-and-wife duo are also looking beyond ballroom, and hope to add ballet classes to the studio’s lineup as well, such as with a master class by George Balanchine-trained dancer and choreographer John Clifford, who founded the original Los Angeles Ballet. No matter the dance style though, they want attendees to feel beautiful, both inside and out, the Padriezas shared.

As they move toward the future, however, the pair has made sure to honor the studio’s historic past, showcasing a piano from the 1800s they believe Belcher played and hanging images of a dancing Shirley Temple alongside her 1938 certificate from the Ernest Belcher Dance Studio.

“Our vision is to give people the best education,” Lilia Padriezas said. “We would like to share with the community our knowledge of dance and our focus of bringing together both the mind and the body.

“People who come in, they don’t want to leave,” she added.