The Wallis Annenberg Center for the Performing Arts presents “Love Actually Live,” a multimedia-concert celebration of the holiday movie soundtrack from the team behind Los Angeles’ award-winning For The Record series, running from Tuesday, Dec. 4, through Monday, Dec. 31. 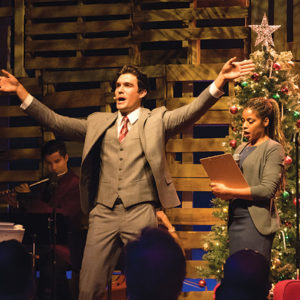 The Wallis production of “Love Actually Live” combines immersive scenery and video screens to bring the classic holiday movie and its soundtrack to life. (photo by Lily Lim)

Co-produced by The Wallis, Shane Scheel and Siobhan O’Neill, and inspired by the Universal Pictures/Working Title motion picture written by Richard Curtis, this world-premiere production transforms The Wallis’ Bram Goldsmith Theater into an immersive cinema. The production, performed live by an all-star cast and 15-piece orchestra, includes the songs “Christmas Is All Around,” “The Trouble with Love Is” and “Both Sides Now.”

The lineup of vocalists includes Rumer Willis, of Fox’s “Empire”; Tony and Grammy Award-winning actor Steve Kazee, of Broadway’s “Once: The Musical”; Kelley Jakle, of “Pitch Perfect”; and more.

With “Love Actually Live,” scenery and video screens intertwine, providing a canvas upon which actors weave between projections as they bring scenes to life through the movie’s album. The film, along with original custom-video content illustrating the London-based setting, is displayed on screens that move throughout the stage, immersing the singers and musicians in a cinematic spectacle.