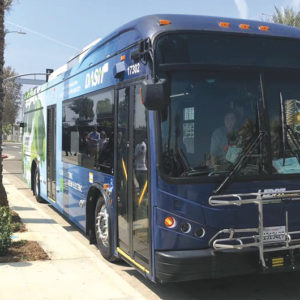 The LADOT is adding hours and new weekend service options on its DASH fleet of buses. (photo courtesy of LADOT Transit)

Beginning in 2017, LADOT Transit completed a transit service analysis with the goal of improving the effectiveness and efficiency of services. The study assessed changes in demographics and developments as well as the impacts of Metro’s rail and bus rapid lines on current and future DASH, Commuter Express and Cityride services.

The New Service Plan was developed following two phases of public hearings held throughout Los Angeles. It incudes thousands of comments received from riders and the public, as well as information from meetings with members of the City Council and their staffs, and from businesses, schools and community-based organizations.

The proposed expansions will require at least two phases, as more buses and personnel will be needed for the DASH service expansions. Phase One service enhancements will begin in early 2019 and will include the addition of Saturday and Sunday service on DASH routes that do not presently have them, earlier morning trips on all DASH routes and the introduction of late evening service to Downtown DASH routes. Phase One also includes expansion of Commuter Express Route 437 into Playa Vista and increased subsidies for Cityride.

Additionally, a new microtransit on-demand service will be launched in the west areas of Del Rey, Palms, Venice and Mar Vista. For sroute and schedule information, visit ladottransit.com.