Co-chaired by LACMA trustee Eva Chow and actor Leonardo DiCaprio, the evening brought together more than 850 distinguished guests from the art, film, fashion and entertainment industries, among others. This year’s gala, in partnership with Gucci,  raised more than $4.5 million, with proceeds supporting LACMA’s film initiatives and future exhibitions, acquisitions and programming. 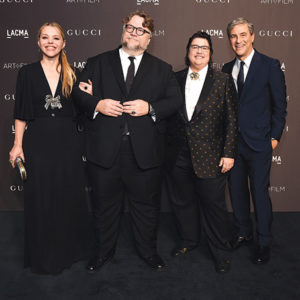 “I’m happy that we honored Cathy Opie and Guillermo del Toro in what was our most successful Art+Film Gala yet. It is so special to acknowledge Cathy’s and Guillermo’s creative work as we continue to support LACMA’s film initiatives and programs,” Eva Chow, co-chair of the Art+Film Gala, said.

“I’d like to express my sincere gratitude to both Eva Chow and Leonardo DiCaprio, who have served as the Art+Film Gala co-chairs since the inaugural event,” Michael Govan, LACMA CEO and Wallis Annenberg director, said. “Cathy captures aspects of American culture, identity and politics that connect with viewers of all backgrounds, and Guillermo challenges us to ignore our traditional art historical narratives and hierarchies as he blends and reinvents conventional genres. We are thrilled to celebrate their accomplishments and contributions.”

Dakota Johnson introduced the evenings entertainment, Beck, who powered through hits “Devil’s Haircut,” “Loser” and “E-Pro” with special guests Dave Grohl on drums and Greg Kurstin on guitar and organ.