Sympathy for the devil is easy when dashing Brit Tom Ellis plays the part. Empathizing with the Third Reich, however? Hell no. That should be clear by now, but a public resurgence of neo-Nazis stateside says otherwise. 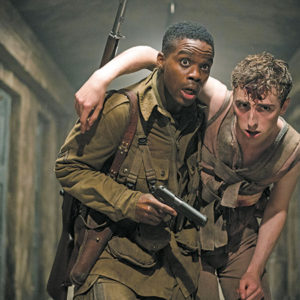 Luckily, Paramount Pictures and producer J.J. Abrams gift us a horror-World War II mashup with a firm “no,” Nazis are, in fact, still the worst, white nationalists be damned. No glimmer of hope. No “some of them were good people.” Just the power of an homage to classic Hollywood in a wildly satisfying sci-fi horror thriller.

Occupied France, 24 hours before D-Day, 1944. The Yanks have one task: destroy a radio tower preventing communications for the attack. Several units are charged with the mission, but only four soldiers reach the village near the target. Their leader, Corporal Ford (Wyatt Russell, channeling his dad Kurt with a series of grunts and cryptic one-liners) is jaded by war, while Private Boyce (Jovan Adepo) is untested on the field, still an idealist about rules of engagement.

Pause for a moment to discuss Boyce, a black member of a predominantly white unit. Desegregated units didn’t start until after WWII, but WWII films are peculiar about what’s considered accurate or not. Imagine this: A war film gets the uniforms wrong. That’s forgivable. But if a film depicts black and white soldiers fighting alongside each other? That’s not OK. Why?

Welcome to fiction, where a film can reimagine, idealize the past, go a different way. So, let’s allow “Overlord” to do what it wants and not complain like the internet trolls. You want a film with all-white units, you have your pick. 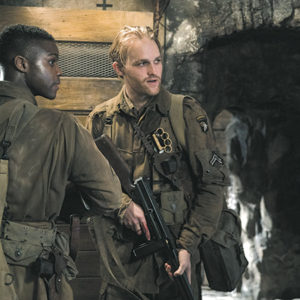 Jovan Adepo as Boyce and Wyatt Russell as Ford stand out in “Overlord.” (photo courtesy of Paramount Pictures)

Back to the film. The radio tower might be the mission, but something more sinister dwells in the church below it. “Overlord” spends ample time on the horrors of war, including a stunning airdrop sequence entirely from Boyce’s point of view worthy of an IMAX screening, but Nazi experiments on the townspeople are a violation against human rights and nature. Hitler’s Germany had a reputation for experimenting on unwilling subjects, but reanimation was probably not as successful as it is here.

This ragtag band of brothers, and their French host Chloe (Mathilde Ollivier), have a limited window to determine if fulfilling the mission is all they must do amid such atrocities, led by SS Hauptsturmführer Wafner (Pilou Asbæk from “Game of Thrones”). Boyce is on board, but Ford is a tough sell, while Tibbet (John Magaro) merely wants to survive and Chase (Iain De Caestecker from “Agents of S.H.I.E.L.D.”) is just a photographer forced to take up arms.

OK, so calling them zombies is a stretch, at least by modern standards. Normal zombies are dead, transforming others into the undead with a bite. These creatures do come back from the void, some hankering for human flesh, but they gain superhuman strength and some can even speak. Plus, the zombie Nazi portion is hardly the most prominent feature of the film. That’s OK. Plenty of others things go down.

Like many horror films, “Overlord” slowly introduces inhuman oddities that will soon dominate the third act. But this is hardly a slow film. Along the way, soldiers drop from planes, dodge bullets, avoid mines and hide from enemy patrols. Long before anything sci-fi arrives, we still traverse the countryside in a war film, all the necessary thrills to keep us company.

Where has director Julius Avery (“Son of a Gun”) been since his first feature film four years ago? No matter, he’s here now, already moving forward with a couple new projects, including a “Flash Gordon” flick. Don’t roll your eyes. After “Overlord,” he can turn “Jersey Shore” into a space opera and make it work.

As an Abrams production, plenty of fans speculated that “Overlord” would be a “Cloverfield” film, the mostly well-made anthology sci-fi film series. That makes sense. Alas, Abrams adamantly denies any connection, but imagining it as the proper third installment, erasing “The Cloverfield Paradox” from the canon, is a fun thought, so let’s make that a thing.

To say “Overlord” is more fun than it should be misses the point. That pretentious line ignores what the horror genre, monster movies, exploitation films and science fiction often get right: original storytelling freed from obligation to science, history and reality. Instead, “Overlord” is a bloody and fantastic romp through several well weathered genres that feel reanimated again (sorry for that).

All aboard the Sugarplum Express for a sweet holiday experience