The 32nd Israel Film Festival in Los Angeles, the largest showcase of Israeli films in the United States, ended on a high note with its biggest audience in over three decades. 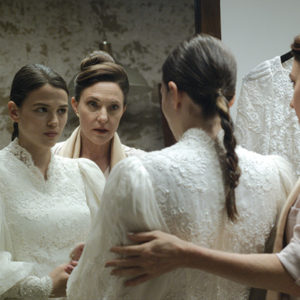 The programming consisted of 40 narrative films, documentaries, television series and shorts, including many U.S. and West Coast premieres along with 25 leading Israeli filmmakers and actors in attendance. For the first time, the festival awarded to the Audience Choice Award winners $100,000, granted by festival sponsors BCL Finance Group, TUNNEL Post and Opus Post Production. The funds will be divided among the winning filmmakers to produce their next films.

The festival’s Audience Choice Award winners, as voted on by audience members, includes a tie between “The Other Story” and “Shoelaces” for Best Feature Film. In addition, “Black Honey, the Life and Poetry of Avraham Sutskever,” won Best Documentary Film.

“At this year’s Festival, Los Angeles crowds embraced and celebrated Israeli filmmaking to thunderous applause and standing ovations for the films. I’m especially thrilled that the Festival and its sponsors BCL Finance Group, TUNNEL Post and Opus Post Production is awarding funding to filmmakers for their next movies,” said Meir Fenigstein, the founder and executive director of the Isreal Film Festival. “These sponsors, along with such partners as Millennium Media, Adelson Family Foundation, Annenberg Foundation and The Hollywood Reporter, are the very foundation that support the Festival’s legacy of presenting the very best of Israeli cinema to U.S. audiences.”

BCL Finance Group, a financing fund headed by Adi Cohen, Michael Bassick and Michael Laundon, which has a film services/financing agreement with TUNNEL Post of Los Angeles, contributed $85,000 worth of post-production services. Opus Post Production, the largest and most advanced post-production house in Israel, provided $15,000 towards filmmakers’ future films.

Highlights of the festival included multi-Academy Award nominated and Emmy Award-winning producer Jason Blum, founder of Blumhouse Productions, receiving the festival’s 2018 Achievement in Film and TV Award; award-winning Israeli director/screenwriter Avi Nesher, director of the opening night film “The Other Story,” being honored with the 2018 Cinematic Achievement Award; and the inaugural launch of the festival at the Skirball Cultural Center, a select presentation of Jewish identity through Israeli film.