The 87th annual Hollywood Christmas Parade, the largest Christmas celebration in America, will be held on Sunday, Nov. 25, at 5 p.m. 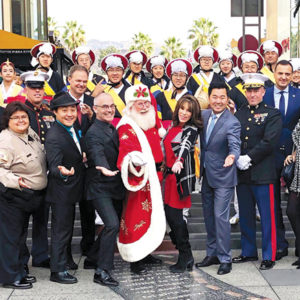 Nancy O’Dell, of “Entertainment Tonight,” will serve as the parade’s grand marshal. Musical performances will include Ashanti, Clare Dunn, The Band Of Merrymakers, The Tearaways, David Archuleta, Ruben Studdard and Elliott Yamin, among others.

A yearly tradition, the parade attracts more than one million in attendance each year, with large inflatable character balloons and celebrity-filled cars making the trek down the three-mile parade route.

Presented and produced by Associated Television International, the parade’s telecast will be hosted by Erik Estrada, Laura McKenzie, Dean Cain and Montel Williams, with special co-hosts Elizabeth Stanton and Garrett Clayton. The event will include a Marine Toys for Tots program, in addition to the live musical performances.

The parade will premiere as a two-hour special on The CW Network on Monday, Dec. 17, at 8 p.m. It will also air to more than one million American servicemen and women worldwide on American Forces Network.

O’Dell, an Emmy Award-winning journalist, has made a career as a host, author, producer and entrepreneur. O’Dell is co-host of the popular entertainment program “Entertainment Tonight.”

Previously, she served as the co-host of “Access Hollywood.” After her mother died in 2008 from complications related to amyotrophic lateral sclerosis, O’Dell became a national vice president of the Muscular Dystrophy Association. She also acts as an international board member for Best Buddies, a nonprofit whose mission is to enhance the lives of people with intellectual disabilities.

The city of Los Angeles departments of Transportation and Police anticipate thousands of people to attend the annual Christmas parade.

LADOT will be strictly enforcing the no-parking policy for the Hollywood Christmas Parade, which includes the citing and impounding of parked vehicles on restricted streets. Impounded vehicles will be towed to the Official Police Garage at Hollywood Tow located at 1015 N. Mansfield Avenue.

There will also be parking restrictions from 6 a.m. to midnight on Nov. 25 for Hollywood Boulevard between La Brea Avenue and Orange Drive.

Additionally, from 3 p.m. to 10 p.m. on Nov. 25, northbound and southbound off-ramps of Cahuenga Boulevard and Highland Avenue will be closed.

Arrest made for murders at Koreatown pot shop