When music industry executives Irving Azoff and Lucian Grainge started their careers in the 1970s, a small group of gatekeepers from the major record labels decided which artists would achieve world fame. Decades later, technology including social media, streaming services and companies such as Apple introducing their own music stores have changed the way new music is noticed, distributed, purchased and listened to.

Azoff and Grainge joined comedian James Corden in a conversation about the past, present and future of their business at the Hollywood Chamber of Commerce’s 2018 State of the Entertainment Industry Conference at the Loews Hollywood Hotel on Nov. 15.

“We love what we do,” said Azoff, chairman and CEO of Azoff MSG Entertainment. “We both love artists, we love the work that they do. You know, it could be worse, we could have real jobs, because I have never felt, ever, that what I do is like hard labor.”

Grainge, chairman and CEO of Universal Music Group, has been at the forefront of the digital music revolution. He’s made deals with Apple, Spotify, Facebook, YouTube and other companies to enable the modern methods of streaming and purchasing music used by fans all over the globe. 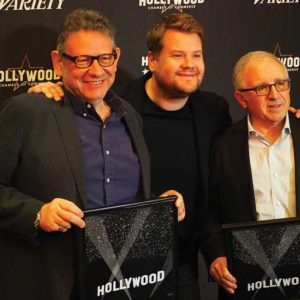 The changes in the industry gave Grainge “a feeling about Los Angeles,” which is why he decided to locate here.

“I just had a gut reaction that the tectonic plates of distribution and content and intellectual property were shifting, and it was a bet that I made,” he said. “It’s the most magnificent place to live from a personal perspective. It was one of the best decisions I ever made with my wife for our family and for our children.”

Los Angeles is on the front lines of several other initiatives in the entertainment industry. Kevin James, who works in Los Angeles Mayor Eric Garcetti’s Office of Film and TV Production, said the city wants to work with the administration of Governor-elect Gavin Newsom to further develop and enhance the opportunities in the entertainment industry in California. James mentioned the possible expansion of $330 million in annual tax credits for qualified film and TV productions in California. Earlier this year, the program was extended through 2025.

“We’re very interested in exploring with the new gubernatorial administration and our state Legislature significantly increasing the cap on the tax credit,” he said.

New and innovative ways viewers will be consuming that content were discussed during a panel discussion “Innovating Virtual Reality/Augmented Reality For All.”

The future of that type of technology, and how it will integrate into the lives of its users, is still an open question. It could facilitate larger, group forms of entertainment, or it could also be used for solitary experiences that are more similar to reading a book.

“I might want to have a by-myself experience,” said Karen Dufilho, an executive producer for Google Spotlight Stories. “When I read a book I want to be by myself. So I kind of think of VR in that way and that I can come out of that and have a conversation with someone about it. I think what you want is that human interaction.

“I think a few years ago we kept thinking, ‘Is this replacing something?’” she said. “And certainly it hasn’t. I don’t think it will, I just think it’s opening up something new.”