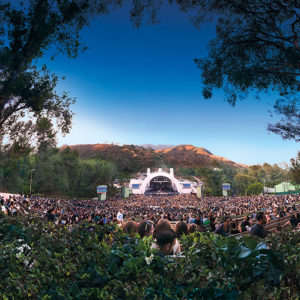 During the summer 2018 season, the Hollywood Bowl hosted performances by Gustavo Dudamel and the Los Angeles Philharmonic, Diana Ross, The Go-Go’s and Beck. (photo courtesy of Hodgetts + Fung)

Renowned for its exquisite setting, the Hollywood Bowl plays host to a range of artists, from classical and pops to jazz, rock and world music. During the 2018 season, the Hollywood Bowl concert series included performances by Gustavo Dudamel and the Los Angeles Philharmonic, the Hollywood Bowl Orchestra, Diana Ross, The Go-Go’s, Rodrigo y Gabriela and Beck, among others.

Special presentations by the LA Phil included the Playboy Jazz Festival, film nights with live orchestra, Harry Connick Jr. leading a 300th birthday celebration of New Orleans, “Annie” with an all-star cast and the first-ever concert at the Bowl dedicated to música norteña in honor of Mexican Independence Day.

Details of the 2019 summer season at the Hollywood Bowl will be announced in February 2019.

A bridge to housing opening in Hollywood