Composer, lyricist and actor Lin-Manuel Miranda and his father, Luis A. Miranda Jr., will participate in a conversation regarding Puerto Rico’s progress toward long-term recovery after Hurricane Maria on Friday, Nov. 16, from noon to 1 p.m. in Geffen Playhouse’s Gil Cates Theater. The event will also focus on the upcoming limited run of the musical production “Hamilton” in Puerto Rico. 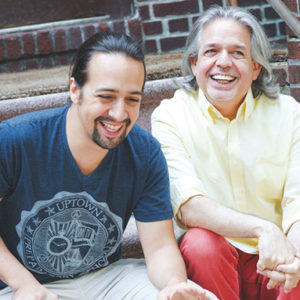 Lin-Manuel Miranda and his father, Luis A. Miranda Jr., will discuss their work on relief efforts in Puerto Rico at the Geffen Playhouse. (photo by Monica Simoes)

For more than 30 years, the Miranda family has championed community advocacy and activism. For Puerto Rico, the family has partnered with the Hispanic Federation to create the UNIDOS Fund, raising over $43 million for relief and long-term rebuilding efforts.

“Lin-Manuel and I are delighted to be back at the Geffen Playhouse to share updates from the island – the progress that has been made as well as the work ahead to continue supporting Puerto Rico’s communities,” Luis Miranda said.

“We are so honored to be partnering again with Lin-Manuel and the Miranda family to support Hispanic Federation’s UNIDOS and their tireless relief and recovery efforts for Puerto Rico,” added Geffen Playhouse Executive Director Gil Cates Jr.

The goal of the UNIDOS Program is to serve the immediate and long-term needs of families and communities in Puerto Rico. The Hispanic Federation has taken unprecedented action, helping coordinate hundreds of donation drives on the U.S. mainland and distributing millions of pounds of food, water and essentials to those most affected by the storm. The organization has also delivered emergency relief aid to Puerto Rico’s largest cities. To make a donation, visit hispanicfederation.org/unidos.

The Geffen Playhouse is located at 10886 Le Conte Ave. Tickets start at $100. For information, visit geffenplayhouse.org/mirandaconversation.

Artist’s work to orbit Earth in collaboration with LACMA