In the partisan battle over the state gas tax increase that went into effect last year, local Democrats are hoping to quell a Republican effort to repeal the tax on the Nov. 6 ballot. 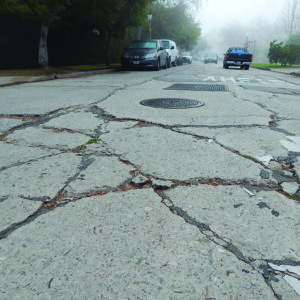 The gas tax was approved by the Legislature to raise funds for road repairs and infrastructure projects. (photo by Edwin Folven)

The tax provides ongoing revenues of $5.1 billion from state fuel and vehicles taxes that would have been used for highway maintenance and transit programs, according to the secretary of state’s office.

California Republicans have framed the tax as an unfair increase to the cost of living. State Sen. Josh Newman (D-Fullerton), who voted for the tax in the Legislature, was recalled by nearly 60 percent of the voters in his district, which includes L.A., Orange and San Bernardino counties, during the June primary election. Gas tax opponents pointed to the recall as a sign that the repeal will prevail.

But supporters of upholding the tax by voting no on Proposition 6, including the Miracle Mile Democratic Club, the Beverly Hills Chamber of Commerce and the West Hollywood City Council, say the funding provides much-needed support for the state’s infrastructure.

“It benefits our economy,” said Julie Stromberg, communications vice president of the Miracle Mile Democratic Club. “The voters know that. They want to see our streets fixed. They want to see more public transportation.”

She added that the repeal initiative “is a way for Republicans to make it very difficult for us to invest in our infrastructure,” and takes a toll

A Public Policy Institute of California poll from Oct. 24 showed 41 percent of likely voters in support of the repeal, compared to 48 percent against it and 11 percent undecided. One month ago, the institute’s polling showed 39 percent support, 52 percent opposed and 8 percent undecided.

The California Professional Firefighters, California Association of Highway Patrolmen and the American Society of Civil Engineers are among the other organizations endorsing a no vote on Proposition 6.

If the repeal doesn’t pass, the Yes on Prop. 6 campaign will turn its attention toward a recall of California Attorney General Xavier Becerra. Supporters of the repeal say the wording on the ballot is misleading and have turned yes votes into no votes.

“Voters who wanted to vote yes on Prop. 6 have been deceived into voting NO – all because the attorney general bowed to special interest pressure to remove the words ‘Gas Tax Repeal Initiative’ from the ballot and replace them with an intentionally false and deceptive title,” Carl DeMaio, chairman of Yes on Prop. 6, said in a statement.

The League of California Cities pointed to a study released earlier this month, the 2018 California Statewide Local Streets and Roads Needs Assessment Report, that the deficit of funding devoted to transportation infrastructure would increase by $12 billion over the next 10 years if the repeal is successful.

“This quantitative report clearly shows that California’s roadways are unsafe and in desperate need of repair,” Carolyn Coleman, executive director of the League of California Cities, said in a statement. “All throughout the state, cities are filling potholes, resurfacing streets, stabilizing bridges and overpasses and making many other much needed improvements to our transportation system. Prop. 6 would eliminate existing funds to make these safety improvements and would leave our roads and bridges less safe and in even worse condition.”