From pilot to OB-GYN, veteran reflects on career

When Dr. Cholene Espinoza, looks back on her childhood, she remembers imperfections and failure. Her career and life are like a Hollywood movie with roles including elite spy plane pilot; passenger originally scheduled to board one of the ill-fated planes on Sept. 11, 2001; wartime journalist; Hurricane Katrina volunteer; published author and OB-GYN. With Veterans Day approaching on Nov. 11, the Air Force veteran reflected on military service and how it changed her life. 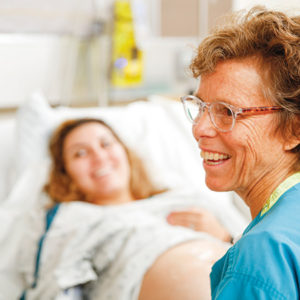 Dr. Cholene Espinoza brings a wealth of experience to Cedars-Sinai, where she works as an OB-GYN. The former pilot plans to return to the military to serve others as a physician. (photo courtesy of Cedars-Sinai Medical Center)

“What I would say to veterans is, ‘thank you,’” Espinoza said. “We’ve served together, you kept me safe and there’s not a day that goes by that I don’t appreciate you in every way.”

At age 17, Espinoza enrolled in the U.S. Air Force Academy, at a time when the academy limited female enrollment to 10 percent of a class. Around Christmas of her sophomore year, Espinoza’s father died, which led her to an unexpected but clear path. After graduation, Espinoza served as a flying instructor and was later was selected as a U-2 spy plane pilot. The planes are single-jet engine, ultra-light aircraft that fly on the edge of the Earth’s atmosphere. Designed to avoid enemy detection, the planes are equipped with sophisticated instrumentation that provides vital intelligence.

“I would fly across Europe all night and it felt as though I could just reach out and touch the stars,” she said. “I would fly over beautiful civilizations like France and Germany, but when I made it to my target areas, it would be pitch black. Then, I would see a flash of light and know it was a blast, and that meant someone is killing or someone is dying. It always gave me reverence for how fragile human life is and how unjust war is.”

Espinoza left the Air Force for a career in commercial flying with United Airlines and then-Emirates Airlines. She was working for United Airlines on Sept. 11, 2001, when terrorists hijacked four aircraft. While she was not scheduled to fly the fourth plane hijacked that day, Espinoza was supposed to be a passenger.

“I was living in New York City at the time and had just accepted a bid to be a captain out of San Francisco,” Espinoza said. “I planned to take the flight as a passenger to find a new home in San Francisco, but the crew desk realized I had gone over my flight limitation hours, so the first leg of my trip was cancelled and I wasn’t on Flight 93.”

The 9/11 attacks led Espinoza to take a series of three-month leaves from United Airlines to cover the Iraq war as a civilian radio journalist. Her first tour was with the U.S. Marine Corps and the second and third with the U.S. Army. Espinoza worked as a journalist for Talk Radio News Service, now Talk Media News.

“I departed Iraq from mobile hospital and there were surgeons trying to save children who had limbs blown off from mines and ammunition,” Espinoza said. “The medical teams were trying to make something right out of something so horribly wrong. When you’re in the middle of a war, you see the destruction and insanity of it, and then you see these beautiful acts.”

“For me to overcome what war had done to me, I needed to engage and fix what was broken,” she said. “That’s what inspired me to leave the cockpit for good and directly take care of people by switching careers from pilot and journalist, to doctor.”

But before becoming a doctor, Espinoza’s desire to serve brought her to Mississippi’s Gulf Coast in 2005 after Hurricane Katrina.

“On our first trip to Mississippi, my spouse and I connected with a small community and fell in love with the people and their struggle,” Espinoza said. “We realized how many people drowned from the storm because they didn’t know how to swim, since there were no community centers or public swimming pools.”

The couple made it their mission to change the community’s access to water safety by raising money to build a public swimming pool. Amid that experience, Espinoza wrote a novel, “Through the Eye of the Storm: A Book Dedicated to Rebuilding What Katrina Washed Away.”

The proceeds raised from the book supported the rebuilding of one of the most hurricane-ravaged communities on the Gulf Coast. The writing process also helped Espinoza accept herself completely. In 2009, she started her journey of becoming a doctor. Then 45 years old, Espinoza began with pre-med classes and later graduated at 50 from St. George’s University School of Medicine in Grenada, West Indies.

Espinoza started her residency training in obstetrics and gynecology at Cedars-Sinai in June 2015 and is scheduled to finish in June. She has been accepted to be re-commissioned into the military as a reserve U.S. Army OB-GYN.

“Military medicine is what first inspired me, but I thought I was too old for the military,” Espinoza said. “But they desperately need doctors.”

While not on reserve duty, Espinoza plans to work in South Sudan.

“With each trip, I can do more, because I’ve learned more here at Cedars-Sinai,” she added. “I start each day with a sense of humility and respect for human life and for people across all socioeconomic levels. That humility comes from seeing a lot of bad things happen and knowing I, too, have made mistakes. But every day is an opportunity to try to do better, let go and forgive ourselves.”