The Los Angeles City Council approved a plan on Nov. 6 calling for three independent wildlife veterinarians with expertise in pachyderms to review the health of Billy, a 33-year-old male elephant at the Los Angeles Zoo. 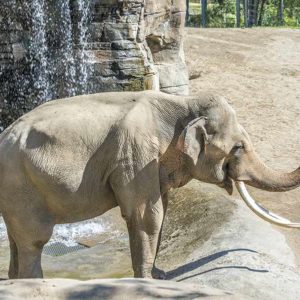 Councilman Paul Koretz, 5th District, first called for the city to study Billy’s health in April 2017 because he believes the elephant may be in distress. Koretz cited behavioral signs such as Billy’s frequent head bobbing, and called for Billy to be moved to a sanctuary.

In January, the City Council’s Arts, Entertainment, Parks and River Committee approved a plan to have Billy’s health analyzed by a team of three independent experts and sent the matter to the full City Council. It took several months for the motion to make its way through the city’s legislative process. On Nov. 6, the council approved the plan for a health review and $75,000 to cover the costs.

The city administrative officer and chief legislative analyst were tasked with identifying licensed wildlife veterinarians with at least five years of experience in working with male elephants to complete the health review. The CAO and CLA’s offices were also asked to work with the zoo to identify sources for the $75,000 for the assessment.

“[The] City Council action dealt with process issues relative to determining Billy’s health and welfare. It ensures that the panel of three veterinarians to be chosen to do an assessment will be chosen independently and that funding will be identified to cover expenses,” Koretz said in a statement. “We want to make sure that the wildlife veterinarians have the appropriate expertise and will be able to objectively determine whether his health issues are exacerbated by zoo living and/or whether he would be better off at a sanctuary where I believe he would live a more natural life and have more exercise and more mental stimulation.”

Billy is one of four pachyderms in the zoo’s 6.5-acre “Elephants of Asia” habitat, which opened in 2010 at a cost of $42 million. The other three elephants are females, and because they are past reproductive age and Billy could present a danger to them, he is kept alone in his own area within the habitat. Koretz contends the isolation and confinement in a relatively small area is detrimental to Billy’s well-being, and a sanctuary would theoretically offer more room for the elephant. Billy also frequently bobs his head, a behavior Koretz and animal activism organizations such as Voices for the Animals Foundation, Last Chance for Animals and Elephant Guardians of L.A. assert is a sign of distress. Zoo officials have said the head bobbing is stereotypical behavior for elephants.

“The L.A. Zoo does not believe it’s in Billy’s best interest to be moved to a sanctuary, as he is already receiving exceptional care in his current home here at the zoo,” read a statement from the Los Angeles Zoo provided by communications director April Spurlock. “However, we will comply with the recommendation of the Arts, Entertainment, Parks and River committee. We are confident that the three independent, licensed veterinarians who will be conducting Billy’s assessment will find him to be in good health and recognize the excellent care he receives here at the L.A. Zoo.”

The zoo is located in the 4th Council District, which is overseen by David Ryu, who supported the independent assessment of Billy’s health.

“Councilmember Ryu is pleased to see this thorough and fair assessment of Billy’s health move forward so we can finally discuss Billy’s future with real expert analysis, not bias or conjecture,” said Mark Pampanin, communications deputy for Ryu. “That’s why he worked so diligently with his colleagues on the Arts, Parks, Rivers and Entertainment Committee to create a comprehensive report that put Billy’s health and well-being first.”

The timeline for the review to take place has not been established.