Last month, the city of Los Angeles celebrated its inaugural Indigenous Peoples Day in Grand Park while the park’s decades-old Christopher Columbus statue was covered with a black box.

Los Angeles City Councilman Mitch O’Farrell, members of the City/County Native American Indian Commission and a couple hundred onlookers gathered in Grand Park again on Nov. 10 to watch contractors lift the bronze statue by crane onto a flatbed truck and permanently haul it away.

“It is up to us, the current generation, to insert a level of harmony and determination to bring this world back into balance,” O’Farrell, 13th District, said. “That’s what this is all about.”

A growing number of cities throughout the U.S. have instituted Indigenous Peoples Day in place of Columbus Day. The Los Angeles City Council voted to approve the change in August 2017. Once hailed as the discoverer of America, Columbus’ role in the genocide and enslavement of this land’s indigenous peoples has become a bigger part of his legacy. 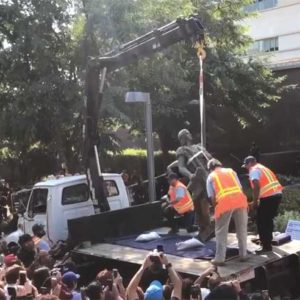 Contractors hauled away the Christopher Columbus statue that had been standing in Grand Park for 45 years in a ceremony led by Los Angeles City Councilman Mitch O’Farrell and the City/County Native American Commission. (photo by Luke Harold)

“The historical record is very clear on what he was responsible for, what he set in motion,” O’Farrell said during a ceremony before the statue’s removal. “But I would argue today, to all of you and everyone else within earshot, that indifference is not acceptable when you just kind of look past someone who is personally responsible for committing atrocities themselves. So, this is the beginning of something, a greater awareness, a greater enlightenment, we can all be responsible for.”

The Los Angeles County Arts Commission voted to move the statue, which had been standing in Grand Park since 1973, into a county storage facility. The Native American Indian Commission, along with the county Arts and Human Relations commissions, are looking for a new home for the statue. Deliberations over what should replace it on its longtime Grand Park perch are also underway.

“We’re here with a little bit of fight,” said Rudy Ortega, chair of the Native American Indian Commission, recalling O’Farrell’s Indigenous Peoples Day remarks. “And that is true. We’re not backing down, we’re not resisting, but we’re marching forward strong with our heads up high, and we’re proud about who we are as indigenous people.”

The commission’s vice chair, Chrissie Castro, remembered the many public hearings at City Hall after O’Farrell authored a motion that led to Indigenous Peoples Day. Proponents of Columbus Day, many of them Italian Americans, argued that Columbus symbolizes Italians who have been coming to America for centuries seeking a better life. Columbus died approximately 350 years before Italy became a country, but his birthplace near Genoa is located in present-day Italy. Indigenous Peoples Day supporters, many of them indigenous themselves, said Columbus shouldn’t be honored for the death and suffering he imposed on their ancestors.

“Whatever all of us are feeling right now, you’re not alone,” Castro said. “We are healing and we are working through all of these feelings together, very complicated histories that we’re working through.”

“The statue of Christopher Columbus rewrites a stained chapter of history that romanticizes expansions of European empires and exploitations of natural resources and of human beings,” Los Angeles County Supervisor Hilda Solis, 1st District, said in a statement.

The supervisors approved a motion by Solis last year to replace Columbus Day with Indigenous Peoples Day on the county calendar.

“The removal of the Columbus statue in Grand Park is an act of restorative justice that honors and embraces the resilient spirit of our county’s original inhabitants,” her statement continued. “With its removal, we begin a new chapter of our history where we learn from past mistakes so we are no longer doomed to repeat them.”