Hundreds of executives, supporters, patriots and heroes assembled at the Beverly Wilshire Hotel on Nov. 7 for the Navy SEAL Foundation’s 2018 Los Angeles Evening of Tribute. 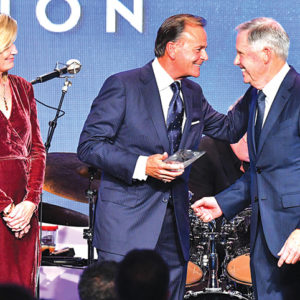 This Evening of Tribute was created to recognize the courage, commitment and sacrifices of the Naval Special Warfare community and give patriotic citizens an opportunity to show their gratitude and support. The Los Angeles event, presented by Trident Sponsor Kennedy Wilson, raised nearly $5 million in support of the Navy SEAL Foundation’s mission to provide care, education and vital support for the Navy SEALs and their families.

After a lively cocktail reception, the doors to the Beverly Wilshire ballroom opened and the University of Southern California Trojan Marching Band performed as guests found their seats. There, they viewed the presentation of the colors by the Naval Base San Diego Color Guard, which was followed by a rendition of the national anthem by Musician Second Class Rachel Vennel. Actor Matt McCoy served as the master of ceremonies for the evening.

“Rick has shown an extraordinary commitment to helping others, improving people’s lives and taking a hands-on approach to giving back. He applies the same intense drive that we’ve all witnessed in his business life to his civic and charitable endeavors as well, and it is truly inspirational,” McMorrow said. “This award is meant to honor an individual who has contributed greatly to our country and upholds the values that epitomize the SEAL community, and I cannot think of a more well-suited recipient than my good friend Rick.”

“Navy SEALs are the very embodiment of what causes a citizen to put his or her hand over their heart. I am grateful and indebted to them for their gallantry and bravery, their sacrifice and devotion, and their love of our county. Most Americans are largely removed from the risks Navy SEALs take, the sacrifices they make and the hardships they endure for all of us,” Caruso said. “To receive an award from the Navy SEAL Foundation – to be mentioned in the same sentence as a SEAL – is an incomparable and singular honor:  An honor that I will forever cherish and hold dear.”

Gold Star wife Courtney Vargo shared a very personal story about the loss of her husband, Thomas Retzer, who was part of a dedicated Naval Special Warfare team fighting the Taliban and was killed in action in 2003. He distinguished himself as a SEAL operator during combat operations in Afghanistan between 2001 and 2003, earning two Bronze Stars with combat “V” for valor.